Xherdan Shaqiri inspired a glimmer of hope among Stoke fans this afternoon when his free-kick flew into the top corner via a deflection from Ruben Loftus-Cheek's head.

And it's the hope that kills you. Crystal Palace came back stronger in the second half and equalised through James McArthur before Patrick van Aanholt took advantage of a sloppy touch from Ryan Shawcross and buried a chance. That late goal from the left-back confirmed Stoke's relegation to the Championship after a 10-year spell in the top flight.

Van Aanholt celebrated with the away fans, with whom he has earned a cult hero status recently due to his improved form and jovial activity on Twitter. 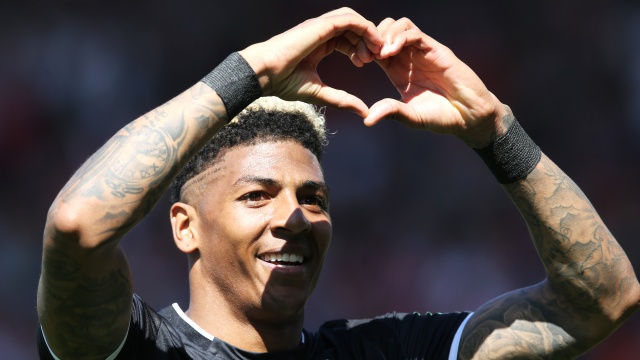 After the game, the Dutchman also took to Twitter to comment on the game, but fans were surprised by what he said. Instead of reeling out a standard 'Buzzing with the win, fans were amazing, happy to score but the most important thing is survival. #CPFC", he issued an apology to the Stoke fans for scoring the goal that relegated them.

Normally I like to celebrate when I score but I’d like to apologise to Stoke City and their fans, I wish my goal didn’t relegate you, but you’ll be back soon! Great club with great fans 👊🏽

You won't be surprised to hear that it got a mixed reaction. Some took issue with him praising Stoke's fans, given their record of booing the likes of Aaron Ramsey, while others questioned why a professional footballer would apologise for scoring a goal.

Poor mentality, they are relegated because there shit not because you scored

Some other people, less prone to outrage, found the tweet to be a nice, classy touch.

Top man. You didn't relegate us mate. Hughes and Lambert did

Classy tweet Patrick. Good luck for next season to you and all the Eagles

popular
Alex Ferguson's dismissive comments confirm truth about Jordan Henderson
The SportsJOE 12 o'clock quiz | Day 286
Wayne Rooney story about Memphis Depay shows why he failed at Manchester United
"There were some tough battles but I was happy to test myself against the best"
QUIZ: Name the clubs to have lost in every Champions League final
QUIZ: Can you name the Scottish football cult heroes?
"The divil you know is better than the divil you don't" - Larkin stands by Cody
You may also like
12 hours ago
Alex Ferguson's dismissive comments confirm truth about Jordan Henderson
3 days ago
Paul Pogba's reward for Burnley bullet by may be seat on Anfield bench
3 days ago
QUIZ: Name the Man United XI from the last time they led after 17 games
4 days ago
Harry Maguire furious as Robbie Brady avoids punishment for Cavani challenge
1 week ago
Four senior Man United players should be heading off before January ends
1 week ago
QUIZ: How many of the top 10 league champions can you name without making a mistake?
Next Page