Juventus supporters might have been concerned but Cristiano Ronaldo was anything but.

Reports in Spain claim that Ronaldo had assured friends and family that Juve would overcome a 2-0 first-leg defeat to Atletico Madrid and that he would score a hat-trick to send the Old Lady through to the quarter-finals of the Champions League.

While we have no more than media reports to rely on for that prediction, we have cold and hard evidence of Ronaldo's confidence courtesy of his former Manchester United teammate, Patrice Evra.

Evra has shared some WhatsApp exchanges with Ronaldo that took place prior to the second leg on Tuesday night and in them, the Portuguese superstar promised to "smash them" in the home leg.

The only person in the world that can take the pressure and be the best player in the world like Michael Jordan is @Cristiano Ronaldo. Don’t try to tap the screen for his number. 😂😂😂 pic.twitter.com/WDl2j0dH0V 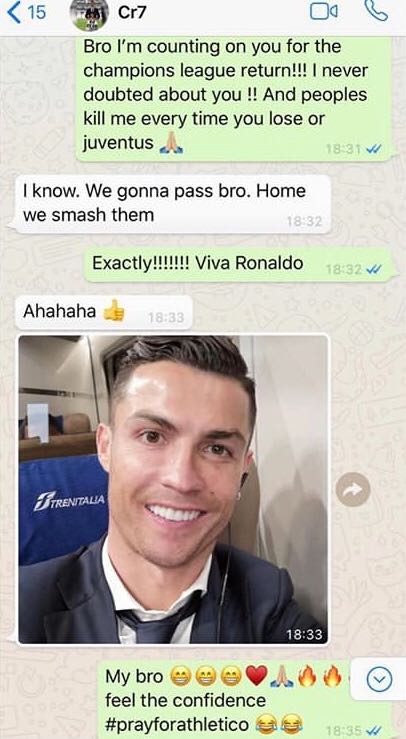 Ronaldo scored his eighth Champions League hat-trick against Atletico and even prompted some praise from his perennial Ballon d'Or rival, Lionel Messi.

END_OF_DOCUMENT_TOKEN_TO_BE_REPLACED

"What Cristiano Ronaldo and Juventus did was impressive," Messi told MARCA.

"I thought Atletico Madrid would be tougher. Ronaldo had a magical night with three goals."

Ronaldo, meanwhile, might want to watch what he sends to Evra in future because the former France international clearly doesn't hesitate to share any messages with the public.

He loves this game, after all.


popular
The SportsJOE 12 o'clock quiz | Day 113
"Never back against the Irish" - How the BBC covered our USA 94 win over Italy
Jack Charlton's role in getting Roy Keane to Manchester United has been revealed
Roy Keane on the experience of being managed by Jack Charlton at USA 94
Can you name every English football league club that begins with 'S'?
Max Holloway's class gesture after controversial UFC 251 loss transcends the sport
QUIZ: Can you name the first professional teams of these footballers?
You may also like
1 week ago
'Pogba seems to really appreciate having someone in there who's taking the limelight'
3 weeks ago
Uncomfortable truth about Roy Keane swipes at De Gea and Maguire
1 month ago
'I never liked Eric Cantona... but he was my favourite player' - Neil Ruddock
1 month ago
10 Liverpool players Manchester United fans loved to hate
3 months ago
The Ultimate Manchester United Treble-Winning Quiz
4 months ago
"The day Dean Henderson comes back, he's obviously fighting to play"
Next Page