Parrott, Connolly and Obafemi all named in provisional Ireland squad

Mick McCarthy has named a healthy dollop of players in his provisional Ireland squad for the upcoming games against New Zealand (friendly) and Denmark (Euro 2020 Qualifier).

The Ireland boss has recalled Robbie Brady and Shane Long to his squad while there are a number of Under 21 stars also named.

It is likely that McCarthy will release many of the younger members of this provisional senior squad to Stephen Kenny's U21s but a few may be retained for the friendly run-out against the 'All Whites' and, following on from that, the crucial game against the Danes.

There are five goalkeepers included in the squad, with Darren Randolph likely to get the No.1 jersey for the Denmark game. Mark Travers, Kieran O'Hara and Caoimhin Kelleher will all be vying for a role in that New Zealand game.

Ireland captain Seamus Coleman is not in the 11 defenders named. He is out of the Denmark game and McCarthy may well be planning on trying out some other right backs against the Kiwis. Ciaran Clark is also back in the extended squad.

Ryan Manning, who can play in defence or midfield for QPR, has earned his first call-up and he will hope to make the cut when McCarthy reduces that squad closer to the two matches. 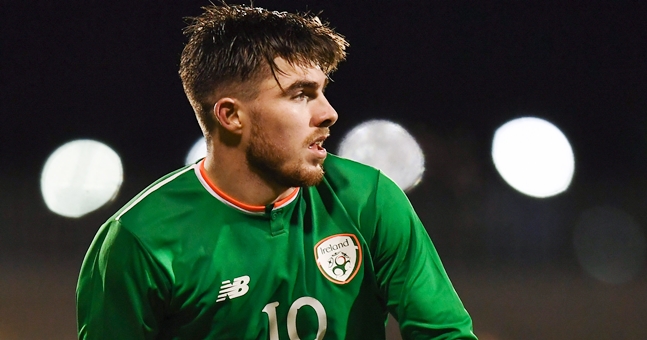 Ryan Manning in Under 21 action against Azerbaijan at Tallaght Stadium. (Photo by Stephen McCarthy/Sportsfile)
Advertisement

In midfield, the big returnee is Brady while Crystal Palace's James McCarthy is also in there. It is in the forwards that Irish supporters may find themselves getting excited.

U21 stars Troy Parrott (Tottenham), Aaron Connolly (Brighton) and Michael Obafemi (Southampton) are all named while Sheffield United striker David McGoldrick is also back in the mix. McCarthy said:

"It could be the perfect opportunity to have a look at Troy Parrott for example and see how he makes the step-up to senior international football after impressing so many people at underage level with Ireland and Spurs.

"We know what we have to do against Denmark and we will look to the tried and the trusted to win that game but who knows what will happen against New Zealand. Maybe someone will take their chance in that match and give me something to think about."


popular
Rory O'Connor gets Wexford out of jail as Shanagher throws it back
Alisson gives moving post-match interview after scoring late winner for Liverpool
QUIZ: Can you name these La Liga cult heroes?
Conor McGregor sends message to new UFC lightweight champion
'Stop, stop, STOP!' - Texas crowd left stunned as UFC legend has arm snapped
Burnley report Leeds' Ezgjan Alioski over gesture made towards Dwight McNeil
South Africa backed to bully "bang average" Lions squad
You may also like
1 month ago
30 seconds of Stephen Kenny firing bullets
1 month ago
Brighter days ahead for impressive young Bazunu
1 month ago
Brian Kerr had seen this coming from miles away, we just weren't ready to hear it
1 month ago
"It's a shocking result... That's on us. We should be embarrassed" - Seamus Coleman
1 month ago
Full Ireland ratings after pitiful home defeat to Luxembourg
1 month ago
Gavin Bazunu starts in goal as Ireland team to face Luxembourg named
Next Page