Ole Gunnar Solskjaer's defence of his goalkeeper won't do much to console David De Gea.

Ever the perfectionist, De Gea was absolutely livid after conceding two goals as Arsenal ran out 2-0 winners over Manchester United on Sunday afternoon.

The first, conceded after 12 minutes at the Emirates, came when Granit Xhaka let fly from range and put enough swerve on the ball to beat United's 'keeper.

De Gea couldn't get near Xhaka's effort and motioned to the bench immediately afterwards as if to ask what more he could have done.

Due to De Gea's usual reliability, his role in Arsenal's opener was heavily criticised by United legend Gary Neville on commentary duty although Jamie Carragher was much more sympathetic towards the Spanish No. 1.

"I don't class it as a mistake," Solskjaer said. "Because I'm stood right behind the ball, we don't put pressure on Xhaka. He must be Brazilian, by the way. Because of the way he struck the ball and it swirls and it moves in the air, it goes to David's left and changes direction completely. That's just one of those things. 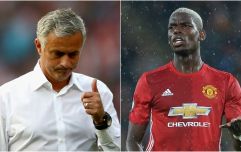 END_OF_DOCUMENT_TOKEN_TO_BE_REPLACED

"He’s disappointed every time he concedes a goal because he is a top keeper. The ball moves so strange it looks like it goes to his left and changes direction, but we were too slow to get up to them. The first 15 or 20 minutes, we never really got up to them and he had time to hit the ball."

While no goalkeeper is expected to save a penalty, De Gea looked even more furious after Pierre-Emerick Aubameyang slotted his spot-kick down the middle after a speculative penalty was awarded by referee Jon Moss with 20 minutes remaining.

When asked if De Gea's ongoing contract talks with United may have played on his mind and affected his focus, Solskjaer was in little doubt.

"Not at all," Solskjaer stressed. "David's really focused and concentrated he's too professional to let his mind wander. The best players know how to focus and he's been absolutely fantastic."


popular
Michael Bisping tears into Dillon Danis for 'trying to be Conor McGregor so hard'
"We did find him hours later and we made up." - How Flynn and his best friend came to blows in Croke Park
The top 10 fastest knockouts in UFC history
The SportsJOE 12 o'clock quiz | Day 333
"Munster was like playing for your local GAA club. The craic was 90"
Six months after Michael Venom Page's flying knee fractured his skull, Evangelista Santos retires
If ever a player would inspire you, it's Kildare's Mary Hulgraine