'It's hard to find the strength to play football again...'

Handkerchiefs at the ready, football fans. Neymar is sad. Reall, really sad. So sad, in fact, he's relying on the big man upstairs to give him the strength to continue playing the sport that earns him more in a week than most of us in a lifetime.

Having only recently recovered from a foot injury, the Paris Saint-Germain forward was unable to prevent Brazil - seen by many as the pre-tournament favourites - from crashing out of the World Cup at the quarter-final stage last week.

Neymar managed a couple of goals along the way, but spent most of his time in Russia trying to convince match officials that every slight bit of contact from an opponent was a career / life-threatening injury.

Now, having had time to reflect on their exit at the hands of Belgium, the 26-year-old has admitted that this is the 'saddest moment' of his career to date.

'I can say that this is the saddest moment of my career,' he revealed in a post on Instagram. 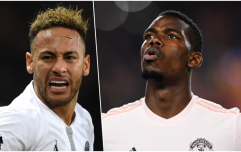 END_OF_DOCUMENT_TOKEN_TO_BE_REPLACED

'It is incredibly painful because we knew we could get there, we knew we had conditions to go further, to make history.

'But it was not this time. It’s hard to find the strength to play football again, but I’m sure God will give me strength enough to face anything, so I’ll never stop thanking God, even in defeat.

'Because I know that your way is much better than mine I’m very happy to be part of this team, I’m proud of all, interrupted our dream but they didn’t get it out of our head and neither of our hearts.'

Dry your eyes football fans. Neymar's young enough to bounce back from this. Give it four years, perhaps we'll get to witness him writhing around in mock agony in Qatar.


popular
Conor McGregor demands apology from ESPN pundit over Cerrone comments
Two giants rise above the fray
"I want to be myself... Imitation's not a great thing, you know?"
Dana White furious with referee Mario Yamasaki for letting debutant's annihilation go on way too long
Kerry vs. Dublin ends in meleé, and a draw
Charlton want Troy Parrott on loan until end of the season
David Clifford leaves Dublin for dead to score sublime goal
You may also like
7 months ago
Neymar gets nutmegged by 19-year-old in training, so instantly fouls the youngster
8 months ago
Vicente del Bosque blames Neymar for encouraging young players to dive
8 months ago
Neymar receives three match ban for hitting fan after PSG cup final defeat
8 months ago
Neymar facing lengthy ban after striking fan after PSG defeat
8 months ago
PSG manager condemns Neymar fight with spectator
9 months ago
Dani Alves criticises PSG and says his teammates 'don't understand Neymar'
Next Page