New home and away Chelsea kits have been leaked

Leaked football kit season is one of the game's greatest traditions, blessing us with a bounty of kits ranging from absolutely mouthwatering to astonishingly shit.

Chelsea have had some, erm, decent kits since they left adidas for Nike. All that can really be said about them is that they're blue and very, very plain.

The word 'plain' though is not a word which can be associated with their new kit, or at least what appears to be their new kit which was leaked this week.

The kit, again by Nike, features the customary swish, the Chelsea crest and the Yokohama logo, but it's the pattern on the shirt which has drawn the most attention.

Now, it's not a bad kit necessarily. The colour is nice, but then again everyone agrees that blue is a good colour, so no one is really getting any plaudits for that. 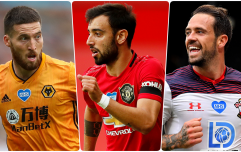 END_OF_DOCUMENT_TOKEN_TO_BE_REPLACED

The main problem with is the fact that it looks more like a knock-off of itself than it does a real kit. The fragmented pattern of what appears to be Stamford Bridge is a nice idea, but it doesn't work.

A little white V-neck would have gone a long way to helping this one look semi-decent, but instead we're left with something that looks like it should be hanging on the side of a stall in Magaluf.

Their away kit for next season also appears to have been leaked and unfortunately it actually makes the home kit look decent.


popular
The SportsJOE 12 o'clock quiz | Day 135
The SportsJOE 12 o'clock quiz | Day 134
It was Pierre-Emerick Aubameyang's final but Emiliano Martinez's moment
"I was around the place like a Jack Russell, snapping at all the big guys"
"Me and him used to room together, and he was a bit of a nightmare"
"It's not about winning at underage. It's about building players and building people"
The SportsJOE 12 o'clock quiz | Day 133
You may also like
4 days ago
QUIZ: Name the 25 clubs relegated from the Premier League more than once
1 week ago
QUIZ: Name every player to win PFA and FWA Player of the Year awards in the same year
1 week ago
"I'm absolutely delighted Van Dijk came along, and he's a much better player than me" - Jamie Carragher
1 week ago
Can you name every English football league club that begins with 'C'?
1 week ago
'Homesick' Jadon Sancho wants to leave Borussia Dortmund this summer
1 week ago
'Cristiano Ronaldo broke David De Gea back in 2018'
Next Page