We will take it.

As Irish fans flooded out of the Aviva Stadium on a balmy September Friday, some of them with smiles on their faces, many of them scratching their heads, a familiar old question was doing the rounds.

Lucky? Oh yeah. There's no doubt about that.

But more pertinently, why oh why do we always have to concede a goal first, for us to actually start playing football? First it was the Denmark game. We were deplorable that night until Hojberg hit the net for the Danes. Then something clicked. Ireland players began looking for the ball. The passes stuck, the chances arrived and the goal came.

That summation passes this time around too.

A subdued first half. Ireland had their moments. Jeff Hendrick was doing his best David Beckham impression with a pair of magical moments. But these moments were too few and too far between.

On the whole, it was fairly listless. Few meaningful passes were strung together. The Swiss, despite not showing much either, were the better team.

END_OF_DOCUMENT_TOKEN_TO_BE_REPLACED

And the second half followed a similar pattern. With Ireland losing the ball on regular occasions, the away team always had a chance of hitting us on the break. They had their opportunities and were it not for some typically trojan defensive efforts, Ireland would have been out the gap.

Step up Shane Duffy, who was eventually named man of the match and the spirited Seamus Coleman. His 55th minute interception was lifesaving.

Up top, we were flattering to deceive. Callum Robinson was tidy but on the periphery and he was the first man subbed. Jeff Hendrick faded out of it while Hourihane struggled to get into it.

And then the Swiss got their break. A slick goal from Fabian Schaer. And then the lads came to life.

Alan Judge injected some much needed pace and invention. The dander was suddenly up as the Aviva crowd started roaring. James McCelan was the one raising the decibels.

His retreating runs were monumental. From there the Irish players grew. 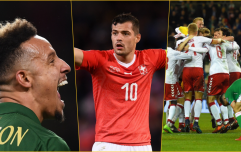 Why a Switzerland-Georgia draw is bad news for Ireland

END_OF_DOCUMENT_TOKEN_TO_BE_REPLACED

One of them reaped the ultimate reward. As the Swiss broke out of defence, Ireland looked in bother.

But McClean was on the scene. He galloped back down his left flank before overturning the Swiss full back. The ball set up nicely for him before his deflected cross landed on Digsy McGoldrick's head.

He has his critics, he has his flaws

But one thing James McClean guarantees is a never-ending spirit and work-rate.

His sprint back, interception and subsequent cross in set up McGoldrick and saved the day for Ireland pic.twitter.com/e308o0n1fP

"He would die for the cause, he gets people off his feet with his tackles and his work. He got that goal for us," said Damien Duff on RTÉ.

Because even though McClean has his critics and his flaws, those same flaws - a lack of technical brilliance and finesse are prevalent throughout Irish squad - but what he guarantees is a fighting spirit and when you have that, you always have a chance.

Here's the state of play in Group D now.

It could have looked a lot worse.