This is Johan Cruyff.

This is not Johan Cruyff. 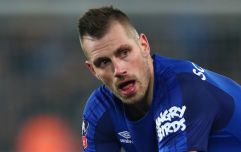 END_OF_DOCUMENT_TOKEN_TO_BE_REPLACED

Poor Morgan Schniederlin did not know the difference however between the Dutch master pictured above, and his Netherlands team-mate Jan Jongbloed.

In the rush to pay tribute to the former Ajax and Barcelona legend after his death on Thuresday, the Manchester United midfielder got all muddled on social media and made this mistake.

It was quickly pointed out to the Frenchman the error of his ways.

And to his credit, he did eventually get the right image up.

He wasn't the only one either to make a basic error of identification, as the Guardian newspaper's back page also got their Dutch players mixed up.