What a day for Adam Idah.

What a charm for Republic of Ireland followers, that manager Mick McCarthy was in the BT Sport studios all day to be quizzed and questioned about one of Ireland's brightest up and coming talents.

The Cork teenager took English senior football by storm on Saturday afternoon, single-handedly taking his club Norwich City to the next round of the FA Cup with a hat-trick against a highly rated Preston North End side.

This was Adam Idah, the 18-year-old Irish striker's first FA Cup start and he played like a man who has the ability for more games like these.

For Norwich, with goals needed in their relegation scrap, this will be invaluable. For Ireland, the potential is untapped, yet the chances will come and the question is whether Idah will be given his chance to shine.

By the looks of his FA Cup exploits, he'll be well worth it. Idah had the ball in the back of the net within two minutes of kick-off at Deepdale. An injury to Teemu Pukki shot Idah into the reckoning, Daniel Farke has plenty of food for thought now.

His second goal arrived in the 42nd minute when the former College Corinthians player in Cork City showed composure and skill in equal measure to punish the Preston North End goalkeeper from the guts of 40 yards out.

Adam Idah with the tekkers 💯

The young forward appears to have plenty in his locker. A former sprinter with the Leevale Athletic Club in Cork city, Idah was often in the conversation for Munster and national underage sprinting titles. That lightning pace is some asset at the top level of English football while his 6 ft 3 in, well built frame ensures he won't be pushed around by centre halves. 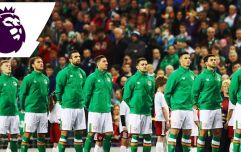 END_OF_DOCUMENT_TOKEN_TO_BE_REPLACED

Indeed, it appears Idah will be the one doing the pushing around with his deft first touch and hold-up play a huge part of his game too.

The question on every Irish fan's lips now is whether Idah will be ready for March 26, when the national side take on Slovakia in the crucial Euro 2020 play-off.

That will be down to Mick McCarthy and having been pushed by Jake Humphrey on BT Sport, McCarthy admitted that it could be hard to look past him.

You love to see it 😍pic.twitter.com/K1OqsqcWFu