It looked for all the world that Matt Doherty's goal and assist were enough to secure a date with Manchester City in the FA Cup final.

Doherty's incredible personal campaign continued on Sunday afternoon, when the Irishman's headed goal against Watford in the first half of their FA Cup semi-final made Wolves fans dream.

After the break, it was Doherty's turn to play provider and he flighted a perfect cross into the Watford box which was taken down by Raul Jimenez and finished brilliantly.

But a moment of absolute genius from Watford substitute Gerard Deulofeu turned the game on its head in the 79th minute before a late penalty from Troy Deeney set up extra time at Wembley.

In the first period of extra time, Deulofeu netted his second of the afternoon and completed the comeback for the Hornets. 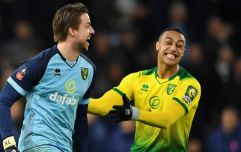 END_OF_DOCUMENT_TOKEN_TO_BE_REPLACED

Doherty will be left wondering how he is not playing in his first FA Cup final after becoming the player with most direct involvement in goals in the FA Cup this season (four goals and three assists).

The 27-year-old still finds himself behind Everton's Seamus Coleman in the Republic of Ireland pecking order, with Mick McCarthy insisting that Doherty will have to wait his turn.

After last month's narrow victory over Gibraltar in his first game back in the Ireland dugout, McCarthy admitted that his experiment of playing both Coleman and Doherty at the same time didn't work.

"It's unfortunate for them but it's not unfortunate for me because if one of them is injured I've got another good one," McCarthy said of his right-back options after the 1-0 win over Georgia.

"I said when I first got the job, I'll play one of them and I'll talk about the one that doesn't play.

"Then, of course, I played the pair of them and it didn't work. So I'm playing Seamus and I'm afraid it's just tough on the Doc. And if he gets in for any reason then it's his place to keep."


popular
The SportsJOE 12 o'clock quiz | Day 104
James Haskell on text exchange with Peter O'Mahony after Ireland's victory over Scotland
David Beckham recalls how a trip to Ireland got him in trouble with Alex Ferguson
"Shane was just gifted. He could play centre back, centre forward, he had everything"
The SportsJOE 12 o'clock quiz | Day 103
"I have more work done than any player in Ireland" - The Trevor Giles tribute show
"The academy boys have turned into small monsters over the past few weeks" - Peter O'Mahony
You may also like
3 months ago
Troy Parrott misses controversial penalty as Tottenham dumped out
5 months ago
Jurgen Klopp's contagious mentality is creating a generation of Liverpool winners
5 months ago
Curtis Jones curls in absolute screamer as Liverpool dump Everton out
6 months ago
Help Irishman Padraig Amond into FA Cup team of the decade
1 year ago
Pep Guardiola snaps at journalist's question over separate payments
1 year ago
Manchester City fan berates journalists after FA Cup final win
Next Page