Matt Doherty inspires Wolves to victory but Coleman limps off

At two different grounds, 270 kilometres apart but within a minute of each other, Ireland's right back "conundrum" could have been sorted.

Matt Doherty is doing all he can to be Ireland's starting right-back for their huge match at the end of this month.

On March 26,  Ireland take on Slovakia in a Euro 2020 playoff eliminator. Should the game go ahead [amid growing coronavirus concerns] and Ireland emerge victorious, they will take on the winner of the Northern Ireland vs. Bosnia match for a chance to reach the European Championships.

Last month, in a sit-down with the Irish press, Mick McCarthy gave the impression that he had long sorted his starting XI for the Slovakia game. If all his main men stayed fit, you'd make a damn good fist of the manager's starting line-up.

He goes with what he knows. Men that he can trust.

Case in point is Fleetwood Town midfielder Glenn Whelan, of whom he said:

"I'm not teaching Glenn Whelan new tricks, I'm not showing him anything to do. Glenn Whelan, as long as he's fit... He'll be running around just as hard in the first division (sic) as he was anywhere else, so, whenever he's fit, he's fine."

Another case in point is Seamus Coleman. McCarthy says he is likely to go with a 4-3-3 formation [likely to revert to 4-5-1 when Ireland are not in possession] in Bratislava. That would rule out going Coleman at right-back with Doherty advanced on the right side of a four-man midfield.

"I will consider all my options because the right side is a bit of a conundrum," McCarthy commented. Doherty only started Ireland's 1-1 draw with Denmark as Coleman was suspended but many felt the Ireland boss would revert to his captain starting against Slovakia.

McCarthy, then, may be forced to re-think such plans after Coleman limped out of Everton's 1-1 draw against Manchester United, at Goodison Park, this afternoon. The Donegal native picked up an ankle knock while competing for the ball with Nemanja Matic and though he tried to play on, he lasted only until the 28th minute.

Bad news for Seamus Coleman, Everton and Ireland as he limps off after 28 minutes pic.twitter.com/mtHLXCkfeT

END_OF_DOCUMENT_TOKEN_TO_BE_REPLACED

Meanwhile, 270 kilometres down the road at the Tottenham Hotspur Stadium, Doherty was scoring his seventh goal of the season.

The Wolves defender drew his side level after Spurs defender Japhet Tanganga failed to clear the ball and Diogo Jota teed him up. 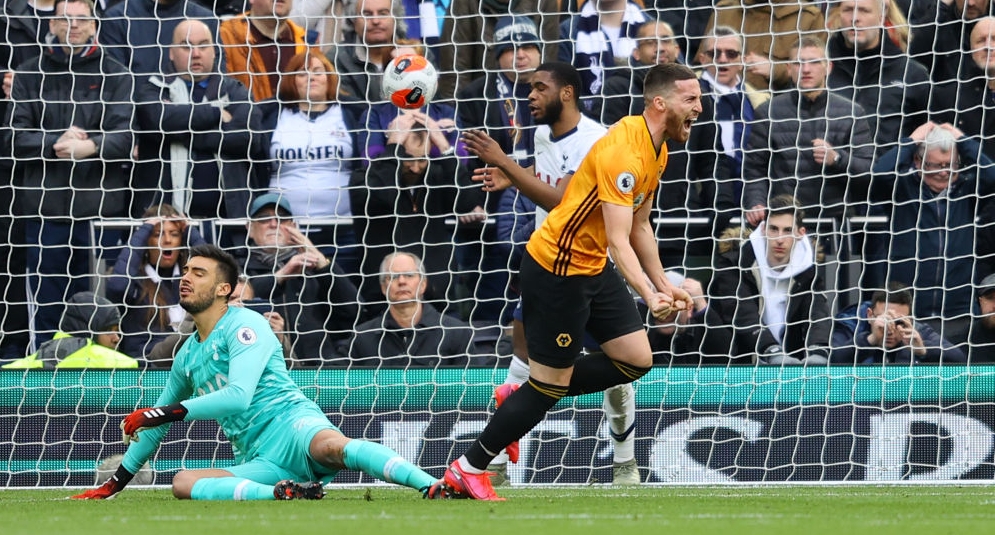 Doherty returned the favour after the break when his low cross was finished off by Jota. Those two goal involvements were Doherty's 10th of the season [7 goals, 3 assists] in a Wolves side that are into the last 16 of the Europa League and up to sixth in the Premier League.

Ireland fans will anxiously await an update on Coleman but can, at least, rest assured in the knowledge that they have one of the Premier League's form defenders ready to step in if needed.