Martin O'Neill has a plan for post-Wes Hoolahan Ireland team

'We can't let him go after lighting up what was undoubted darkness in Irish football.

'We can't let him go after leading the way to some kind of glory or respect again with the safest, most radiant of flashlights.

END_OF_DOCUMENT_TOKEN_TO_BE_REPLACED

So wrote Conan Doherty back in July 2016 as we looked back on Ireland's exploits at the European Championships. Wes Hoolahan was 34 and, along with Robbie Brady, our best footballing hope.

One year on and not much has changed. Ireland are in a great position to qualify for the 2018 World Cup but have failed to do the business when it has been expected of them at the Aviva Stadium.

Hoolahan sat on the bench for far, far too long against Austria when it was clear as day that he should have been in from the start. We never seem to learn.

Martin O'Neill may well relent and select the Norwich City midfielder to start the next few qualifiers. He is already planning for life after Wes, however, and has identified the man he feels can step up as a creator, goalscorer and attacking inspiration.

It is the same man whom O'Neill has asked to be more of a defensive screen in recent outings - Jeff Hendrick. 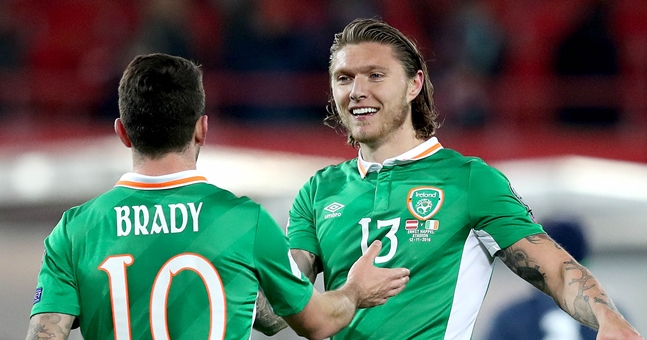 "I think Jeff has got the ability to do [play behind the strikers]. At club level, if you've midfielder who can score 10-12 goals from normal play, you've got yourself a proper player and that's something he can aim for.

"Can he sit in and do a holding job? That's not outside his capability. He played in the game in Austria [a 1-0 win last November] and was excellent in a defensive role and taking the ball forward for us but in terms of kicking on from the Euros, I think it's been a stop-start season for him.

"I think he should throw the shackles off and go and play again."

END_OF_DOCUMENT_TOKEN_TO_BE_REPLACED

The man that shackled Hendrick wants him to fling them loose. It is a lot to ask but this time last year we all felt it was a role Hendrick could step up and do.

There is still time for Hoolahan to play an important role for his country but at least O'Neill is planning ahead.