Manchester United fans would have been excused for thinking 'hell yeah' when they signed Marcos Rojo.

It was August 2014 and, having somehow survived David Moyes' doomed tenure as Alex Ferguson's successor, they needed a lift.

That summer, United offered their best impression of a galáctico transfer window in snapping up Angel Di Maria and Radamel Falcao.

END_OF_DOCUMENT_TOKEN_TO_BE_REPLACED

However, those who closely followed Argentina's run to the World Cup final in Brazil that summer will have noticed Rojo's eye-catching performances.

The then 24-year-old impressed at left-back for La Albiceleste, offering a potent combination of no-nonsense tackling and tireless running. He even showed an eye for goal, scoring the winner in the 3-2 group stage victory over Nigeria.

Having enjoyed a stellar 2013/14 season with Sporting before Brazil, Rojo looked a star in the making.

END_OF_DOCUMENT_TOKEN_TO_BE_REPLACED

Unfortunately, it hasn't quite panned out that way. Rojo has managed just 68 Premier League appearances in four seasons.

Yes, injuries have more than played their part but, even when fit, Rojo has never established himself as a dependable defender.

While he has performed well at times, United fans live in fear that Rojo is never far away from a rash tackle or a moment of madness.

A mix of the brilliant and the baffling. That's Rojo.

Live look at Mbappe as he runs by Rojo .. #FRA #ARG #WorldCup pic.twitter.com/WsXNXdLc4p 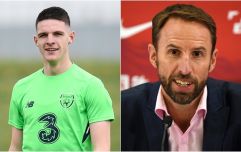 END_OF_DOCUMENT_TOKEN_TO_BE_REPLACED

In Russia, Rojo had the most Rojo World Cup imaginable. He struggled against a physical Iceland side in Argentina's Group D opener. Although his mis-hit shot ended up with Sergio Aguero scoring, he was dropped by Jorge Sampaoli for the crushing defeat to Croatia.

He was then reinstated for the critical decider with Nigeria in Saint Petersburg. With the score locked at 1-1 on 86 minutes and Argentina on the brink of a humiliating group stage exit, the very left-footed Rojo popped up in the box and fired a right-footed volley into the corner to send his country through to the last-16.

It was some strike too, judging the flight of Gabriel Mercado's cross to perfection before guiding an unerring effort into the corner despite pressure from Victor Moses.

Lionel Messi joyously jumped on Rojo's back as the Argentine fans went ballistic in the stands.

The Argentine media understandably lauded Rojo's moment of brilliance. After the game, Rojo said that Messi had told him to roll the dice and get forward. Be your country's hero.

His 'unlikely hero' tag didn't stick for long though.

Just 12 minutes into Argentina's clash with France on Saturday, Rojo was faced with a dilemma: he had possibly the fastest footballer on the planet approaching him at full-pelt.

As Kylian Mbappe tore through the Argentine midfield and came one-on-one with Rojo, you could almost predict what would happen next.

The blistering French teenager moved up a gear and whizzed past Rojo, leaving the defender to do what he thought was the only option: wrestle Mbappe to the ground. We may never know whether Messi had told him to do that too.

Between Fazio, Rojo and Caballero, defensive drills in training for Argentina must be like an episode of Benny Hill.

A penalty was rightly given and Rojo received a yellow card. After Antoine Griezmann converted the spot-kick, Rojo spent the rest of the first half living in fear as Mbappe terrorised the Argentine back-line.

Angel Di Maria's thunderbolt levelled things up before half-time but Rojo did not reappear for the second period. Federico Fazio replaced the United man and proceeded to fail miserably in trying to stop Mbappe, who scored two excellent goals to put the game beyond Argentina.

Argentina's World Cup campaign was a disaster but at least they haven't been dull. With players like Rojo knocking about, it never will be.


popular
Specsavers troll former Liverpool star for Darwin Nunez headbutt claim
“Players flourished when Roy Keane left” - Rio Ferdinand on why Keane was a 'detriment' to Man United
"To be able to call myself the fastest man in Irish history is just amazing" - Olatunde overjoyed after record-breaking run
The moment Israel Olatunde realised he qualified for the Euro 100m final is what it's all about
Jurgen Klopp reacted like everyone else to Darwin Nunez headbutt red card
Jamie Carragher on the three Man United players Erik ten Hag can't trust
Wexford, Waterford and Kilkenny down some good men as Australia calls
You may also like
4 years ago
Toni Kroos responds strongly to Mesut Ozil claims of racism in German camp
4 years ago
Benjamin Mendy responds to Pep Guardiola's comments on his social media use
4 years ago
Everton on brink of signing Yerry Mina from Barcelona
4 years ago
Jose Mourinho explains why Paul Pogba plays better for France than he does for Man United
4 years ago
Thierry Henry 'verbally agrees' to become new Aston Villa manager
4 years ago
Bayern Munich president launches astonishing verbal attack on Mesut Ozil
Next Page