Manchester United line up Mourinho replacement and it's a cracker

A ball hasn't been kicked yet in the 2018/19 Premier League season but it feels like all is not well at Manchester United already.

Manager Jose Mourinho has spent his preseason grumbling about his players' performances and the lack of summer signings, prompting bookmakers to make him the favourite to be the first Premier League manager to be sacked next season.

Jose Mourinho's time at Manchester United will only end one way https://t.co/kCk9sMY7YF pic.twitter.com/J7VjkLFI3V

Mourinho claims that the club's executive vice-chairman, Ed Woodward, failed to bring in any of the five players who were on his shortlist and he's admitted that his team could be "in trouble" ahead of his third season at Old Trafford.

They did, however, beat Real Madrid 2-1 on Tuesday night so maybe he'll cheer up soon.

"I would like to have two more players," Mouriho said of the transfer business though.

"I think I am not going to have two.

"I think it’s possible I am going to have one. It’s possible. And that one I gave a list to my club five names a few months ago, and I wait to see if it's possible to have one of these players.

"If it's possible it's possible. If it is possible good, if it is not possible we keep fighting and working and believing in the players that we have."

END_OF_DOCUMENT_TOKEN_TO_BE_REPLACED

While United have thrown their backing behind Mourinho this week, a new report claims that the Red Devils have identified a potential replacement if the 55-year-old doesn't see out the final two years of his contract.

The Sun reports that former Real Madrid boss Zinedine Zidane has been singled out as United's top target if Mourinho leaves. 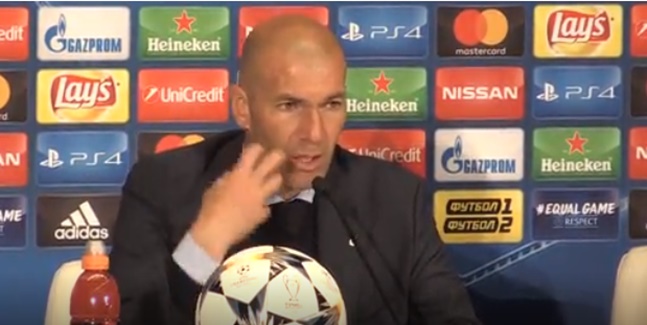 Zidane shocked everybody by walking away from the Santiago Bernabeu just days after delivering Real Madrid's third consecutive Champions League triumph in May and while he's been linked with a boardroom role at former club Juventus, perhaps he would be tempted to take one of the biggest jobs in football if a vacancy becomes available at United.

popular
In defeat, Jerry Kelly dies with his boots on in coming of age final display
The SportsJOE 12 o'clock quiz | Day 286
QUIZ: You have 30 seconds to answer this one tricky football question
SportsJOE 2000s Football Quiz | Round 11
You'll have to be a diehard fan to get 20/20 in this Liverpool players of the 90s quiz
"Djokovic is a tool" - Tennis world turned upside down in day of days
"I knew I didn't have the pace or strength, it was just get it and try kick it left or right"
You may also like
1 day ago
Jurgen Klopp calls Man Utd style 'the worst thing you can face in the world' after draw
1 day ago
Jordan Henderson says Liverpool were frustrated by "strange" half-time whistle call
1 day ago
Liverpool fans complain at timing of half-time whistle in Man Utd draw
1 day ago
Scapegoats stand up for United as Liverpool's profligacy continues
3 days ago
Alex Ferguson's dismissive comments confirm truth about Jordan Henderson
5 days ago
Paul Pogba's reward for Burnley bullet by may be seat on Anfield bench
Next Page