Manchester City have commented on speculation linking their manager Pep Guardiola with a move to Juventus after several Italian media outlets claimed that the Catalan coach had agreed a four-year deal at the Turin club.

Guardiola has just come off the back of his most successful season yet with Manchester City, in which the club won the Premier League, the FA Cup and the Carabao Cup. They also won the Community Shield at the start of the season.

Juventus are currently looking for a new manager after Massimiliano Allegri stepped down from his role at the end of the season following five years which saw the Old Lady win five successive Serie A titles.

Asked about the speculation linking him with the move after his team's 6-0 FA Cup final victory over Watford, Guardiola categorically denied it.

While Manchester City are yet to make an official statement as a club on the issue, board member Alberto Galassi has rubbished the speculation. 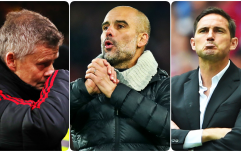 END_OF_DOCUMENT_TOKEN_TO_BE_REPLACED

"As a Manchester City board member, I was surprised to read such nonsense," he told Sky Italia.

"He's our coach and he wants to stay with us. He can't understand why his insistence [that he will remain at City] hasn't been listened to. They [the reports] are lies.

"The first thing a serious club does in a case like this is contact the other club.

"It's unthinkable that City would be unaware of an imminent presentation [of Guardiola as Juventus manager]. The story is completely without foundation."