Sunday afternoon was a day to forget for the full-back

Manchester United's hopes of playing Champions League football next season are over.

Another dismal showing saw them draw 1-1 with already-relegated Huddersfield Town on Sunday, meaning they can no longer finish the season inside the top four.

END_OF_DOCUMENT_TOKEN_TO_BE_REPLACED

United had taken a lead through Scott McTominay early on in the game. Having failed to build on their lead, Ole Gunnar Solskjaer's side saw Huddersfield equalise after an hour when Isaac Mbenza capitalised on a mistake from Luke Shaw.

After the game, Shaw received more criticism on Twitter from United supporters who used a 25-second clip of the full-back's attempts to track back in the second half to highlight a perceived lack of effort.

The footage - which we're not allowed to embed due to the Premier League's strict rules about sharing footage of its games - was posted to Twitter by user, @GrayPower3.

It begins  just after a United attack has broken down, close to Huddersfield's area.

The ball is passed past Shaw, who can be seen wearing the number 23 shirt.

As Shaw turns back towards his own half, he is overtaken by Alex Pritchard, who has just made the pass out wide to his teammate.

Shaw then disappears from the shot as Huddersfield burst forward, eventually reappearing seconds later when Pritchard gets the ball back inside the United half.

Back in position, Shaw makes a few attempts to close Huddersfield's players down in the remaining seconds of the footage, never really getting close to the ball.

The clip has attracted hundreds of retweets in the time since it was posted on Twitter, plenty of United fans critical of Shaw in the replies to it. 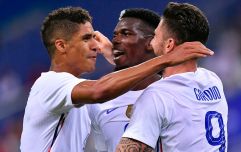 Man United given permission to make approach for Raphael Varane

END_OF_DOCUMENT_TOKEN_TO_BE_REPLACED

'Didn't break sweat all game not 1 overlap or 1 decent cross and passed the ball back to Jones about 60 times,' said Twitter user @ScottRoge8.

'Not good enough for a while now,' added @mthwaites49. 'Just coasting through games.'

United captain Ashley Young dismissed suggestions that United's players had not put in the required effort levels during the game.

"I can't fault the effort and the attitude," Young told Sky after full-time.

"It was all us, especially in the first 20 minutes. It's tough to take, their goal. We knew we needed other people to help us but we needed to help ourselves and we haven't done that today. It's a disappointment."

United will now close the season at home to Cardiff City next weekend knowing they will play in the Europa League in 2019/2020.


popular
The JOE Friday Pub Quiz: Week 253
Cormac Egan's interview after Offaly u20s beat Dublin is everything that is pure about the GAA
After seven years in charge, Armagh have a big decision to make on Kieran McGeeney
Pre-match rituals - What it's like in the Croke Park changing rooms before a game
Absolutely no doubt who was the top pundit of Euro 2020
"Any team I've been involved in over the last five years, they've been way above their station" - GPS stats gone too far
Sean Cavanagh and Pat Spillane tear into each other in entertaining half-time side-show
You may also like
2 weeks ago
Man United could land Eduardo Camavinga at bargain price
2 weeks ago
Raphael Varane reaches "pre-agreement" with Manchester United
2 weeks ago
Man Utd won't pay over the odds for Raphael Varane after Sancho deal
3 weeks ago
Luke Shaw hits back at "obsessed" Jose Mourinho after latest criticism
3 weeks ago
Eduardo Camavinga's representatives 'to meet Man United next week'
1 month ago
Joel Glazer says Gary Neville has been "pretty hard" in his criticism of Glazer family
Next Page