Aaron Wan-Bissaka was at The Lowry hotel in Manchester on Wednesday night, and is expected at the Aon Complex for his medical, and to discuss personal terms.

Manchester United are set to up their summer spending to £60m and add Wan-Bissaka to their squad for next season. The England U21 full back is set to officially complete his move to United, and join Swansea winger Daniel James, in the next 48 hours.

The move was delayed a fortnight as the Crystal Palace defender was away with Aidy Boothroyd's Under 21 side. Once confirmed, United will then turn their focus to two other key areas.

United boss Ole Gunnar Solskjaer wants a new centre back and attacking midfielder in, and in plenty of time before the season starts. He is going to keep Axel Tuanzebe around for the summer, despite Aston Villa wanting the defender back after a successful loan spell.

There were two blows for United, and their pursuit for a quality, domineering fullback, in the past 24 hours.

First up, the news that Matthjis De Ligt has agreed personal terms with Juventus. The 19-year-old Ajax captain is set to receive a basic salary of £270,000 per week, according to The Guardian, that could climb to £400,000 with add-ons.

Juve, who are now managed by Maurizio Sarri, must settle a price with Ajax and are hoping to get a deal done for £70 million. Barcelona had been favourites to sign The Netherlands international but United and Paris Saint Germain were also interested, and had made enquiries to his club. 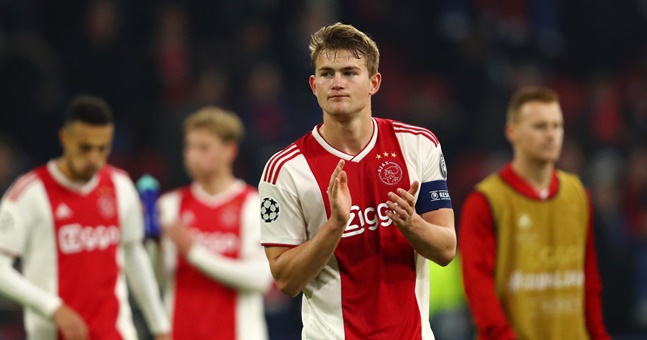 Secondly, The Mirror is reporting that United are walking away from any potential deal for Harry Maguire after Leicester City were demanding £100 million for the England international.

END_OF_DOCUMENT_TOKEN_TO_BE_REPLACED

The same outlet is reporting that, due to the De Ligt and Maguire news, United are considering Barcelona's Samuel Umtiti for the umpteenth time. The club may also go back to West Ham about Issa Diop, whom was valued at £60m by the Londoners earlier this month when the United links first emerged.

Solskjaer wants a new driving force in midfield and someone who can contribute his fair share of goals and assists. Real Madrid have contacted Ajax about tidy midfielder Donny van de Beek, who would cost between £45-£55 million.

His agent had floated the Premier League as a possible destination - with Tottenham and United linked - but Real could be about to splurge more cash. If he is willing to move, though, United should reach out with an offer.

Bruno Fernandes, then, may be United's next signing as his representatives have already been in contact with United and, once again, Tottenham. Having enjoyed a cracking season with Sporting Lisbon and performed well in the Nations League for Portugal, the player would arrive in good form and confidence.

His fee appears to be climbing by the week, with some outlets now claiming United would have to stump up £70m for the former Udinese and Sampdoria attacker.

Elsewhere, Sean Longstaff would appear ripe for another approach as Newcastle United are now without a manager. Rafa Benitez is leaving the club at the end of this month and Newcastle have not brought in a single soul this summer.

Five new arrivals may cap United's transfer activities but they could go into the market, later in the summer, if any of Alexis Sanchez, Romelu Lukaku. David De Gea or Paul Pogba depart.

popular
The SportsJOE 12 o'clock quiz | Day 76
The SportsJOE 12 o'clock quiz | Day 75
SportsJOE 2000s Football Quiz | Round 4
You'll need all your powers to get 20/20 in this 1990s Irish footballers quiz
Promoter teases Pacquiao-GGG superfight, but fans are having none of it
Jermaine Pennant appears on Jeremy Kyle after Big Brother debacle
QUIZ: Can you name the Football Italia cult heroes? | Part 2
You may also like
3 months ago
"The day Dean Henderson comes back, he's obviously fighting to play"
3 months ago
"I would have lynched him after that" - Roy Keane
3 months ago
Four features of Mason Greenwood's goal vs Watford that shows he is going to the very top
3 months ago
Carragher pushes all the right buttons and Keane delivers in gold
3 months ago
Harry Gregg: the goalkeeper who saved a family
3 months ago
Three players Solskjaer wants compared to three Man United are after
Next Page