"You could see he was going to be a top-class player."

Many Manchester United supporters will have been seeking solace in the transfer talk pages, across various sports pages and sites, since their side was knocked out of the Champions League. Many more will then have hit search engines for the name Toby Collyer.

It will be clear to most that United are set for a major squad overhaul over the next six to 18 months. Having had four permanent and four care-taker managers since Alex Ferguson moved on, in 2013, the 20-time league champions are expected to install a new permanent boss this summer.

END_OF_DOCUMENT_TOKEN_TO_BE_REPLACED

Several players are running through contracts, while others will have seen the writing is on the wall and be moving on. Interim manager Ralf Rangnick, as well as trying to keep the team competitive, is more or less running a stock-take on the current squad.

By next season, the likes of Paul Pogba, Edinson Cavani, Nemanja Matic, Juan Mata, Diogo Dalot, Eric Bailly, Jesse Lingard and Anthony Martial may be on their way. Others like Dean Henderson and Cristiano Ronaldo could also move on, while Marcus Rashford's representatives let it be known, after the Manchester City league defeat, that he was considering his long-term future at the club.

While there are major tasks at hand for Rangnick, technical director Darren Fletcher, and whatever manager United have lined up, is making sure the squad is healthy. That means keeping up the search for young talents and prospects they could bring in.

To that end, the capture of Toby Collyer makes sense. The 18-year-old is highly rated and impressed United coaches when he came in for a trial at Carrington, last month. 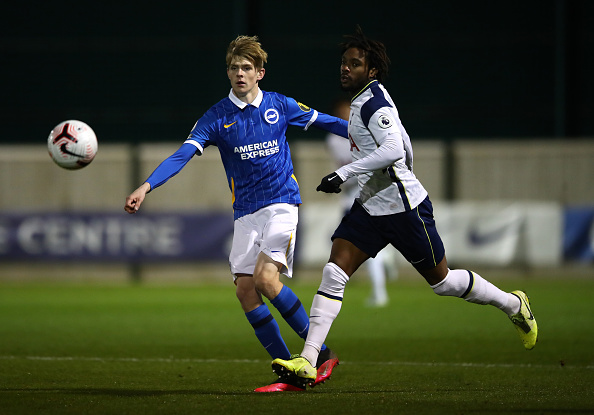 Toby Collyer of Brighton and Hove Albion is challenged by Bennett J'Neil of Tottenham Hotspur during the Premier League 2 match, in January. (Photo by Bryn Lennon/Getty Images)

'This is where Manchester United have to go again' - Ralf Rangnick

Collyer, a centre midfielder, impressed with Brighton's underage sides, in recent seasons, and grabbed the attention of several scouts when he more than held his own with much more experienced players in a friendly against Huddersfield.

Arriving on a three and a half year deal, the signing of Collyer represents a transfer model that Ralf Rangnick recently spoke about - identifying players can can fit in with the system and ethos of the senior side. Rangnick commented:

"It's about having a clear transfer strategy and signing players who fit into that system. And that’s what both clubs [City and Liverpool)] have been doing in the last five or six years.

"If I look at their transfer policy and their transfer success, they haven’t had many players who people would say that maybe that wasn’t the right signing. Both clubs have been pretty successful, and this is where Manchester United have to go again."

END_OF_DOCUMENT_TOKEN_TO_BE_REPLACED

The search will be on for high-profile players, no doubt, over the coming months. Rangnick is already clearing out dead-wood and letting contracts of ageing players run out.

The larger squad needs an impetus of young, quality players. Collyer and many more should follow before the start of the 2022/23 season.