"We are Man United"

And so it comes to this.

"We are Man United."

On Tuesday, when beating Manchester City in consecutive games and taking a stride towards a League Cup final were still possibilities, Ole Gunnar Solskjaer talked up the club he loves so dearly.

"We have been up and we've been down but we've always come back."

"We are still in our own heads the biggest club in the world so of course we want to get back to where we were. It's going to take time."

In December, Solskjaer claimed United were not doing too badly for themselves - albeit during a phase of player transition - as they were only losing a game a month. They have now lost three of their last six games, and all in the space of 16 days.

We are Man United. If there is a phrase Solskjaer could do with putting on the back-burner, that is it.

Right now, given the state of the football this squad puts out some weeks, telling United fans they are watching Manchester United is akin to Dessie Curley telling his cycling mad son that he had got him a 'Stephen Roche Special' for Christmas:

Exactly one month after United out-played Manchester City at Etihad Stadium, Pep Guardiola sent his team out to right some wrongs.

City played without an out-and-out striker and flummoxed United completely. The hosts started well and them City, flooding the middle third and inter-changing positions, took control of possession and only gave it back after they scored.

END_OF_DOCUMENT_TOKEN_TO_BE_REPLACED

"From 15 minutes to half-time was the worst we have played this season," Solskjaer lamented after his side's 3-1 defeat. In truth, United got off lightly. City themselves had a heavy workload over Christmas - five games in 12 days - and Guardiola admitted his side had flagged in the second half.

Given that Solskjaer had the insipid Newcastle, West Ham, Watford, Aston Villa and Arsenal performances to choose from, the 'worst we have played this season' comment should tell you all you need to know.

Solskjaer was not helped by United's inept business in the summer transfer market - Ander Herrera and Romelu Lukaku were not properly replaced - but he is still picking players that do not merit selection any more. Phil Jones and Jesse Lingard are in such rank bad form at present that even those that dislike the club cannot but feel some shred of sympathy for them. Their struggles are like some masochistic performance art piece.

If the nadir was City's dominant victory was their third goal (and we'll get to that), their opening goal showed up Jones' scrambled defensive thinking. With Bernardo Silva touching the ball ahead of himself and lining up a shot on goal, Jones checked to his left and basically gave the Spaniard a free run at it. 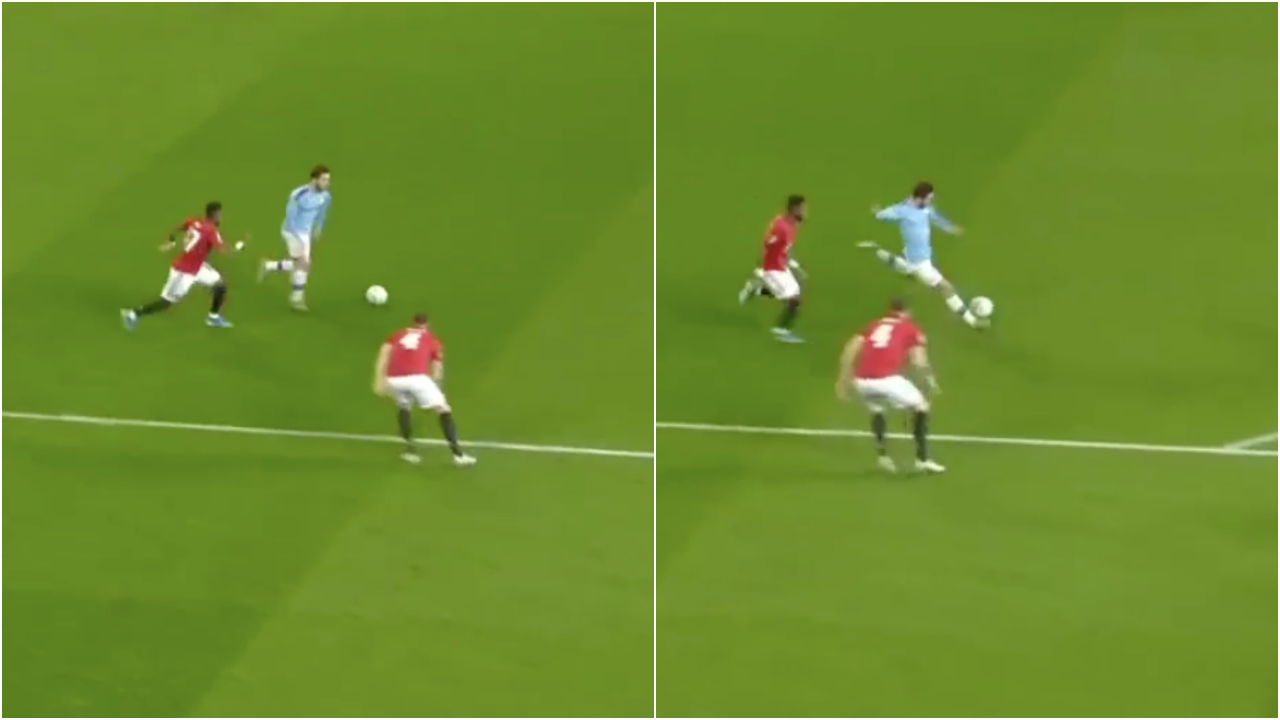 City scored a second through Riyad Mahrez, when Silva left Victor Lindelof on his rear-end with a slide-rule pass, and then we had the killer. A full tilt City counter-attack was almost cut out by Brandon Williams but his interception landed at the feet of Kevin de Bruyne.

The Belgian took poor Jones for a ride before leaving him for dead. David De Gea saved de Bruyne's strike before Andreas Pereira bundled the rebound into his own net. De Gea threw his arms up in exasperation as Alan Smith, on Sky Sports, stated, "This is getting a bit embarrassing."

An own goal has extended their lead to 3-0 before half-time at Old Trafford.

END_OF_DOCUMENT_TOKEN_TO_BE_REPLACED

Last February, Man United extended the contracts of Jones (June 2023) and put in the option of a one-year extension. The powers that be at this club have put themselves in this hole but Solskjaer has still played Jones six times. He has one Premier League outing this season - 45 dreadful minutes against Sheffield United - so at least the Norwegian cannot be accused of being blissfully unaware of the player's wretched form.

As for Lingard, who lasted only 45 minutes against City, Solskjaer has played him 27 times this season. He was excellent in the away win over City but that was nine games ago. Anderson used to infuriate fans by putting in a great performance one game and then coasting through his next few. Right now, many United fans would swap Lingard with the 31-year-old Brazilian and he retired from football last September.

Mason Greenwood, with one slick assist for Marcus Rashford last night, showed yet again why he is more suited to the United starting XI than Lingard, who is playing without a iota of confidence or belief.

Following the game, Solskjaer had to respond to queries about Ashley Young being linked with a move to Inter Milan. He insisted the club would do no business that 'weakened the squad' in January but some would debate whether Young leaving would actually improve matters.

What this club desperately needs is an injection of quality but there are few signs of United's crack transfer unit bringing that, or indeed anyone, in.

We are Man United may as well read as 'We were Alex Ferguson'. Time to move on, move on more dead wood [from the pitch and board room] and end the Solskjaer project while they are at it.

You may also like
2 months ago
"I would have lynched him after that" - Roy Keane
3 months ago
Four features of Mason Greenwood's goal vs Watford that shows he is going to the very top
3 months ago
Carragher pushes all the right buttons and Keane delivers in gold
3 months ago
Harry Gregg: the goalkeeper who saved a family
3 months ago
Three players Solskjaer wants compared to three Man United are after
3 months ago
Nigeria watches on as Odion Ighalo's Man United dream begins
Next Page