Hirving Lozano was touted as one 'one to watch' at the World Cup.

The exciting winger was widely expected to be Mexico's outstanding player and, judging by his performance against Germany, he'll have no problem living up to the billing.

The 22-year-old PSV Eindhoven starlet, who has been linked with Liverpool, Arsenal and Everton in recent months, shone for El Tri in their opening group game against the holders at the Luzhniki Stadium on Sunday.

Determined not to be outdone by Russia's Aleksandr Golovin, another young player of the tournament contender, Lozano was a constant menace to the German defence and crowned an impressive first-half performance with a brilliantly-taken goal.

Lozano's movement, touch and finishing caught the eye. Mexico cut out a predictable German attack and immediately sprung a rapid counter. Javier Hernandez played an urgent one-two with Andres Guardado before tearing into the space in the German midfield. But look at Lozano in the first image below. Sensing the promise in the attack, he hares down the left. 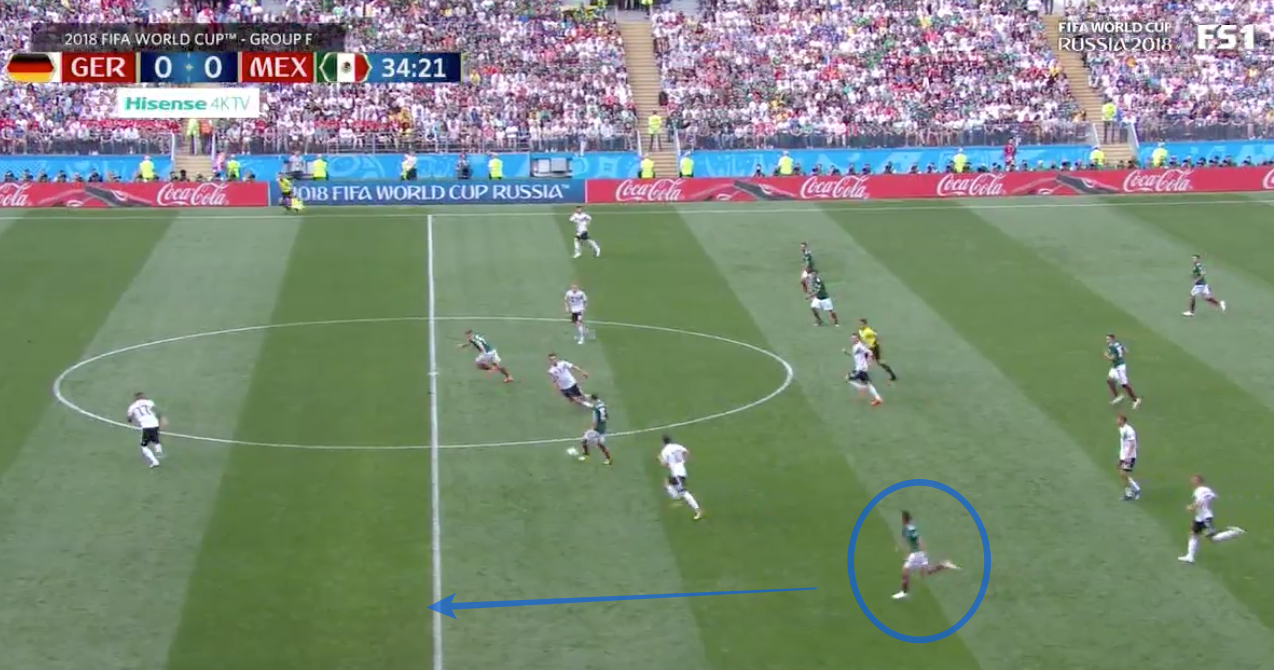 Hernandez finds him and he's got a chance on the edge of the area. 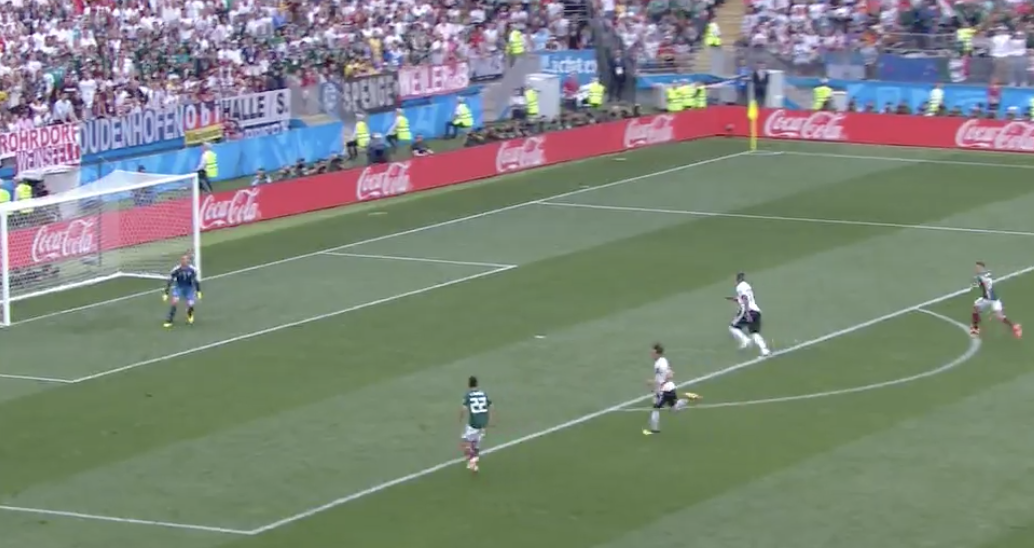 Of all people Mesut Ozil is the one tracking back. However, the Arsenal midfielder's attempt at winning the ball is anaemic and Lozano effortlessly ghosts past him. 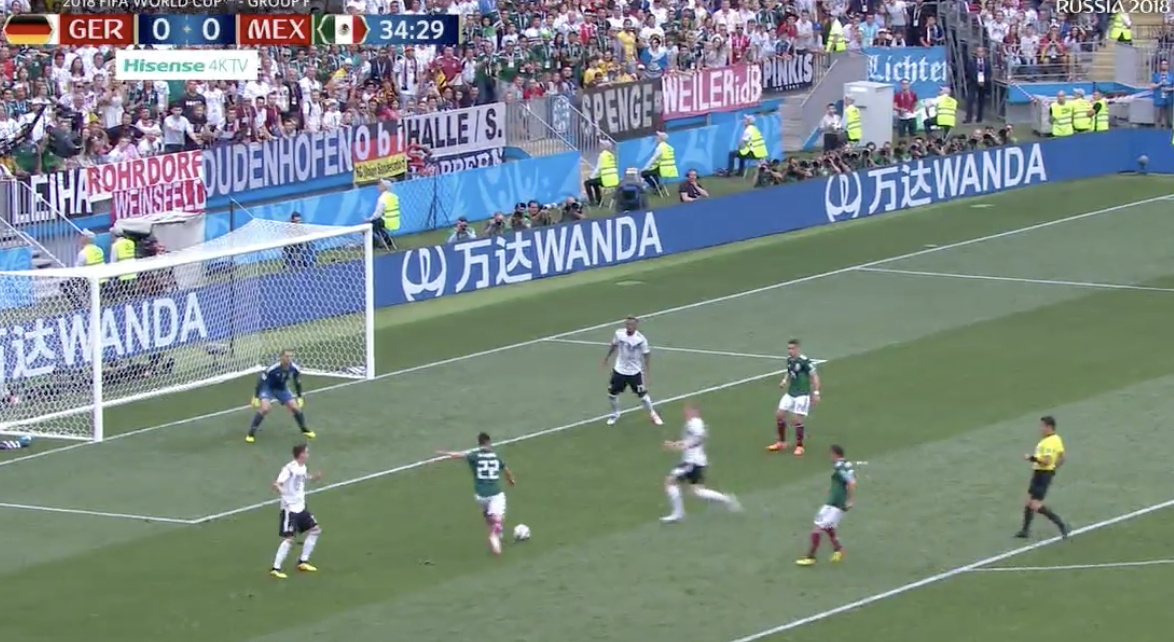 Setting himself, Lozano rifles a right-footed effort into the bottom corner before Toni Kroos can intervene. 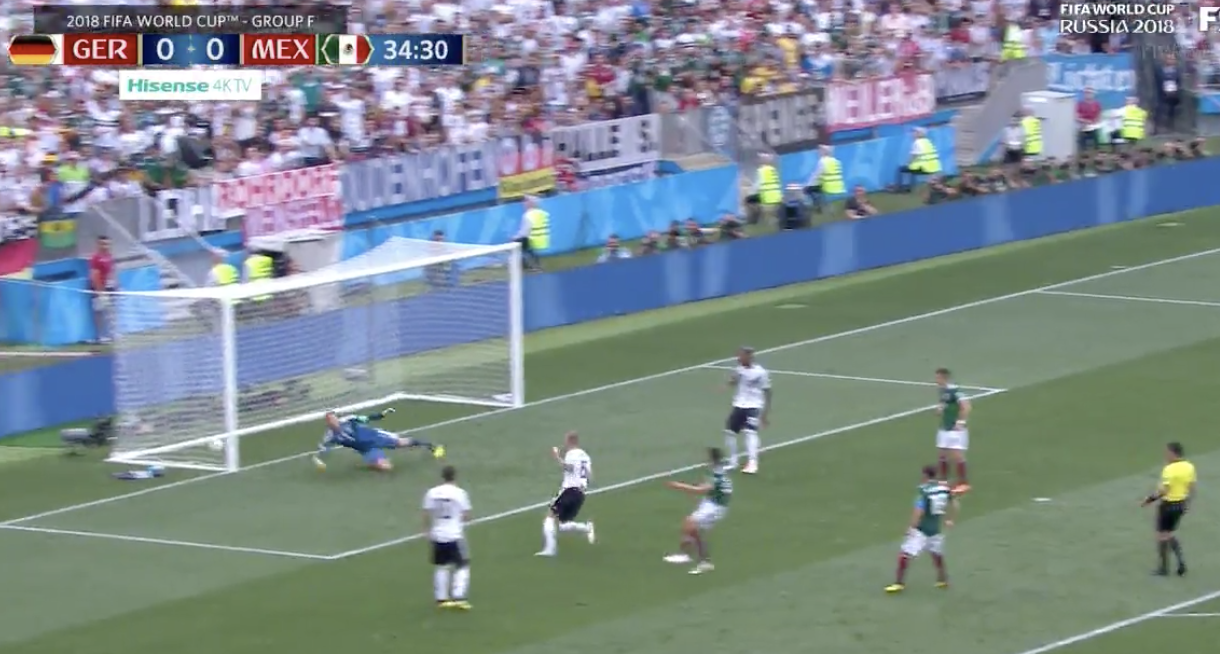 END_OF_DOCUMENT_TOKEN_TO_BE_REPLACED

And yes, it's even better with Mexican commentary.

Lozano, often referred to as 'Chucky' due to his fondness for jumping up from behind the substitutes' bench to scare his teammates, gave Joshua Kimmich, one of the world's finest right-backs, plenty of headaches and illustrated why he has become one of European football's hottest properties.

Mexico manager Juan Carlos Osorio, perhaps sagaciously, took Lovano off after 66 minutes following a couple of meaty challenges from the winger, replacing him with the more experienced Raul Jimenez.

Lozano scored 19 goals in 34 appearances for PSV, helping the Dutch side to the Eredivisie title. He has been strongly linked with Everton as the Toffees' new director of football, Marcel Brands, was the man who brought him to PSV. 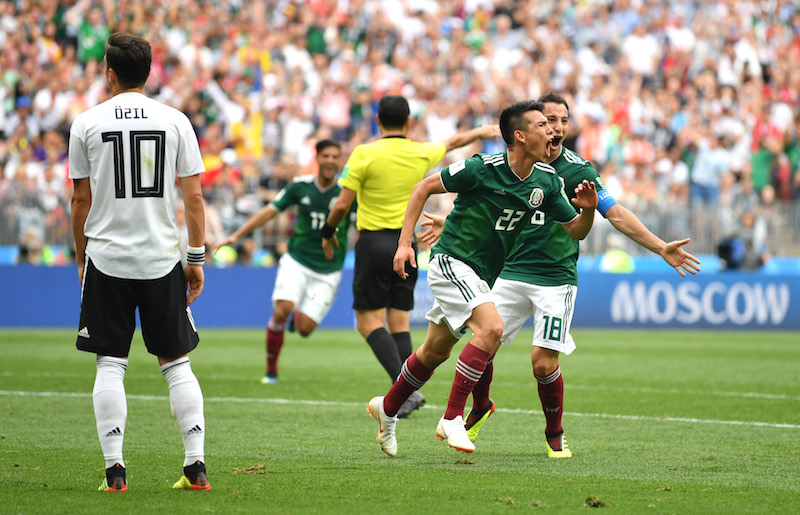 With eye-catching performances like these, Lozano's stock will only rise. He is aware that several clubs are tracking him, too. Speaking about his future ahead of the World Cup, the former Pachuca winger said: "Brands brought me to PSV, I'm grateful, happy, but I'm not thinking about whether I'm an option [for Everton].

"If there is an option to leave we'll decide what is the best decision for me and my family, but I'm concentrating on the national team."

Lozano is part of a very exciting Mexico side who evidently have enough quality and cohesion to go far in Russia. For now, he is right to remain singularly focused on the national side, but once the World Cup is over, he can expect a flood of tempting offers from interested clubs.

Matchwinner and man of the match against Germany. Not a bad way to start your tournament.


popular
The Ireland XV that should definitely start against Italy
ROG hits the nail on the head assessing Ireland's performance
Player ratings on a dismal day for Ireland in Twickenham
"Emotions will be charged" - Sean O'Brien backing Ireland for Triple Crown
"Next thing, all I see is this 'BANG' coming in over me... It was O'Driscoll"
QUIZ: How well can you remember this season's Premier League results so far?
Triple Crown wrenched away as England scrape Ireland off their boots
You may also like
6 days ago
Harry Gregg: the goalkeeper who saved a family
1 week ago
Three players Solskjaer wants compared to three Man United are after
1 week ago
Nigeria watches on as Odion Ighalo's Man United dream begins
3 weeks ago
Woodward must "prove us all wrong", not Sanchez
4 weeks ago
Fall guy Solskjaer is not going anywhere
4 weeks ago
If Twitter had been around for Eric Cantona's kung fu kick it might have looked something like this...
Next Page