"He is a man I genuinely loved. He gave me his support when I needed it most"

You may be too young to remember but you've heard all about the stories. Seen the interviews, split yourself at the one-liners, heard tales about the parties. One of the most magical things about the Jack Charlton era is that everyone was in on the act, even those who wouldn't usually give a continental about the beautiful game.

And therein lies the greatness of the uncultured Englishman who conquered Ireland. For ten years, Jack Charlton was at the helm and those ten years were the greatest in the history of Irish football. A time when we dared to dream, a time when our own mixed it with the best in the world.

END_OF_DOCUMENT_TOKEN_TO_BE_REPLACED

Jack Charlton's was loved here and his genuine passion for Irish football and the mutual respect that existed between coach and supporters was perhaps best seen on his final outing, in Anfield in 1996.

The Dutch outplayed and outclassed Jackie's team on that night but despite a disappointing end to a disappointing Euro qualifying campaign, the Irish fans sang loud for Charlton's team, they sang loud for Charlton. And when he returned for one final lap of honour, the Irish fans roared their hearts out as Jack's emotions showed after ten brilliant years. The Dutch hadn't a clue what was going on around them, the Irish knew.

Tributes have poured in from far and wide after the 85-year-old's passing on Saturday morning with a number of past players summing up the impact and the peerless personality of the great man.

"He became a father figure to me.

"He is a man I genuinely loved.

"He gave me his support when I needed it most." 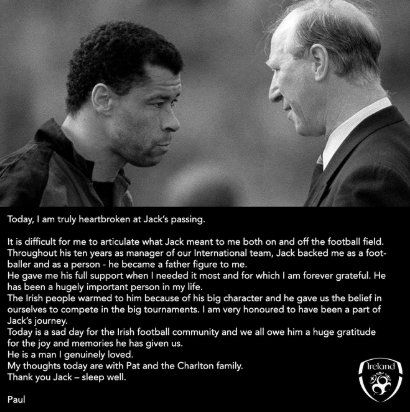 Father figure to me for 10 years, thanks for having faith in me. Sleep well Jack, Love ya 💔

John Aldridge talked about the "priceless" memories, from both on and off the pitch.

Absolutely gutted that BIG JACK has passed away!What a football man,,Loved and adored,specially in Ireland.The best manager I was lucky to play for.The times we had on and off the pitch was priceless !my thoughts are with pat and the family!RIP my good friend Never Forgotten !!

Kevin Kilbane grew up in the Charlton era.

Such sad news to wake up to this morning. Farewell big Jack, you mean so much to Irish people and gave us all the greatest of memories that we’ll cherish forever. #RIPBigJack 🇮🇪 pic.twitter.com/bHvBnZA0xr

"Manager of probably the best ever Ireland side," said Gary Lineker.

Saddened to hear that Jack Charlton has passed away. World Cup winner with England, manager of probably the best ever Ireland side and a wonderfully infectious personality to boot. RIP Jack.

Packie Bonner looks back with a smile on his face.

Those were the great memories, thank you Jack pic.twitter.com/i6ZnQEan5I

The Jack Charlton we knew and love, Andy Townsend saved the best 'til last.

RIP to one of the greats.