"I enjoyed it" - Luke Shaw opens up on Mourinho's tough love

If anyone would know...

Luke Shaw has not had an easy ride at Manchester United.

After a difficult first season under Louis van Gaal, he hit a run of form at the start of the 2015/16 campaign. That was cut short by a devastating leg break against PSV in the Champions League.

END_OF_DOCUMENT_TOKEN_TO_BE_REPLACED

The long road to recovery was a difficult one, and even since his return to fitness, he has been subjected to a lot of blunt criticism from his own manager, José Mourinho.

But the England left-back believes the tough love approach has actually helped him turn his fortunes around. 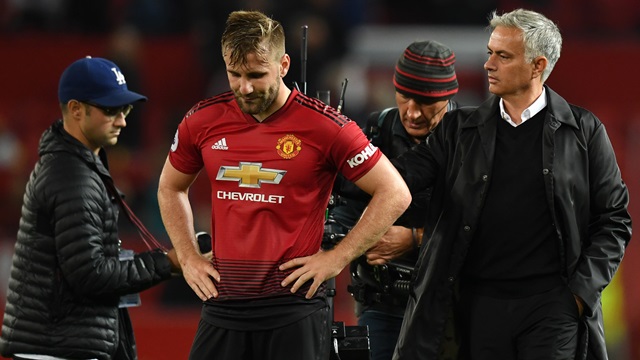 A strong start to this season was rewarded with a new long-term contract for which Shaw is thankful to Mourinho.

“I kind of enjoyed it,” he said, ahead of United's Champions League clash with Young Boys on Tuesday night.

“It was a very big challenge for me with some of the things he’s said in the past, especially in the last year or two years."

Last week, Mourinho complained about the “mentality” and “lack of aggression” in the modern player, name-checking Shaw and some of his teammates, but the the 23-year-old was not fazed by his comments.

“What he said the other day, that was more a generational thing. I don’t think it was really aimed as much at us as individuals,” Shaw said.

“He’s talking about nowadays’ generation, as opposed to when he was a bit younger.

“You need a thick skin, of course, playing for the manager but 100% this club, it’s the biggest club in the world and we as players need to take what’s said on board.”

END_OF_DOCUMENT_TOKEN_TO_BE_REPLACED

United take on Young Boys in their fifth group stage game of this season's Champions League campaign. Mourinho's side look likely to qualify for the knock-out stages, barring a disaster, with seven points after four matches. Juventus currently top the group with nine while Valencia trail in third place with five points.


popular
Ireland make respectful gesture during Parade of Nations at Olympic opening ceremony
The JOE Friday Pub Quiz: Week 253
Cormac Egan's interview after Offaly u20s beat Dublin is everything that is pure about the GAA
After seven years in charge, Armagh have a big decision to make on Kieran McGeeney
Absolutely no doubt who was the top pundit of Euro 2020
Pre-match rituals - What it's like in the Croke Park changing rooms before a game
"Any team I've been involved in over the last five years, they've been way above their station" - GPS stats gone too far
You may also like
1 week ago
Jose Mourinho admits he might have been 'too harsh' on Luke Shaw
1 week ago
Man United given permission to make approach for Raphael Varane
2 weeks ago
Man United could land Eduardo Camavinga at bargain price
2 weeks ago
Raphael Varane reaches "pre-agreement" with Manchester United
2 weeks ago
Man Utd won't pay over the odds for Raphael Varane after Sancho deal
3 weeks ago
Luke Shaw hits back at "obsessed" Jose Mourinho after latest criticism
Next Page