Despite losing the World Cup final, the people of Croatia have not stopped celebrating their second-place finish all week. Parties in city squares and open top bus parades have attracted hundreds of thousands of people to come together in celebration of a quite incredible achievement.

At their most recent celebration event, the Golden Ball winner was leading proceedings, just as he does on the pitch, mic in hand. The Croatia captain then noticed a young boy who suffers from Down syndrome in the front row, desperate to meet his hero.

Modric, being the kind and generous soul that he is, invited the young boy on stage and embraced him. The celebrations then continued with Modric and the boy arm in arm.

@lukamodric10 invites kid with Down syndrome on stage during party in Zagreb 🇭🇷🙏 pic.twitter.com/0FPsjzpsMI 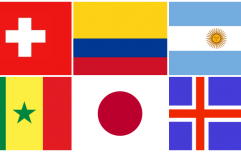 END_OF_DOCUMENT_TOKEN_TO_BE_REPLACED

It's yet another example of how such a small act of kindness can make somebody's day, week, even year. That's an experience that the boy will never forget and that Modric should be commended for.

Croatia might not have come home with the trophy, but they certainly showed the team why they are a team to be admired both on and off the pitch.


popular
"I was like, ‘My ear is hanging off my head. Can you not see that?!'"
QUIZ: How well do you know Manchester United players of the 2010s?
The SportsJOE 12 o'clock quiz | Day 307
QUIZ: Identify the missing sponsors from these football jerseys
QUIZ: Name all 50 of these 2000s Champions League players – #4
Cristiano Ronaldo sets rough retirement date
"Hang on lads, there is more to life outside of Dublin" - Connellan is a rebel with a cause
You may also like
2 years ago
More people in Ireland watched England v Croatia in World Cup than All Blacks win
2 years ago
Gareth Southgate offers classy response when asked about Declan Rice
2 years ago
Toni Kroos responds strongly to Mesut Ozil claims of racism in German camp
2 years ago
Benjamin Mendy responds to Pep Guardiola's comments on his social media use
2 years ago
Everton on brink of signing Yerry Mina from Barcelona
2 years ago
Jose Mourinho explains why Paul Pogba plays better for France than he does for Man United
Next Page