His farewell came under criticism after Sunderland agreed to kick out the ball at the 26th minute after he received a guard of honour.

Terry lapped around Stamford Bridge upon the conclusion of the match saying goodbye to fans but it looked as if he would be staying in the Premier League.

Bookmakers suggested that he would be moving to Bournemouth for his career swansong but that move is now looking unlikely.

According to the Bournemouth Echo, the 36-year-old is not on Eddie Howe’s wish list and may have to venture abroad for a club. 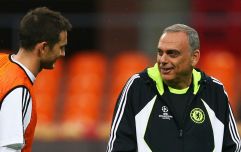 END_OF_DOCUMENT_TOKEN_TO_BE_REPLACED

However, fellow Chelsea players Asmir Begovic and Nathan Ake are on the radar of the Bournemouth manager.

Despite the update, bookmakers are still backing the former England international to move to the Cherries but there is also a strong case that a Chinese club could come in and offer Terry a large amount of money to move to Asia.

popular
In defeat, Jerry Kelly dies with his boots on in coming of age final display
QUIZ: You have 30 seconds to answer this one tricky football question
The SportsJOE 12 o'clock quiz | Day 286
SportsJOE 2000s Football Quiz | Round 11
"Djokovic is a tool" - Tennis world turned upside down in day of days
You'll have to be a diehard fan to get 20/20 in this Liverpool players of the 90s quiz
"Newcastle fans have been served up dire tripe for about ten years"
You may also like
2 weeks ago
The stakes at Chelsea are too high to accommodate Lampard's tactical education
2 weeks ago
Frank Lampard's job in danger as Chelsea look at replacements
2 weeks ago
Man Utd no longer have a free run at Jadon Sancho transfer
3 weeks ago
Thomas Tuchel 'interested' in replacing Frank Lampard at Chelsea
3 months ago
Frank Lampard blasts Marcos Alonso for trying to watch second half on team bus
3 months ago
"We never ever do that. Okay?" Klopp scolds Liverpool bench for reaction to red card
Next Page