What is Liverpool's best midfield trio?

It was one of the big questions hanging over Liverpool's late 2-1 win over Tottenham on Sunday.

The Reds moved back to the top of the table thanks to a late own goal from Toby Alderweireld but their midfield trio of Jordan Henderson, James Milner and Gini Wijnaldum came under scrutiny with Liverpool having less possession than Spurs at home when they have averaged over 58% possession for the  Premier League season.

Former Liverpool midfielder and manager Graeme Souness said after the match that you'd love to play with the aforementioned trio if you were a defender, but if you were an attacker, you'd like some better service from the middle of the park.

Souness has been quite critical of Liverpool's midfield this season and wrote in his The Times column last month that they have not provided enough goals as a unit.

“Modern midfielders get away with murder,” Souness wrote. “They say they ‘recycle’ possession, whatever that means, but you’re either a defensive or an attacking midfielder.

“If you’re the latter, assists are OK, but do you score goals? Liverpool’s five midfielders have six league goals between them.

“They get away with it because of the front three they have, but it’s not enough from James Milner, Georginio Wijnaldum, Jordan Henderson, Fabinho and Naby Keita.”

With Alex Oxlade-Chamberlain returning, Liverpool's midfield could be about to receive some added dynamism and with Adam Lallana and Xherdan Shaqiri also capable of filling in, Jurgen Klopp has no shortage of options but what is his most effective unit? 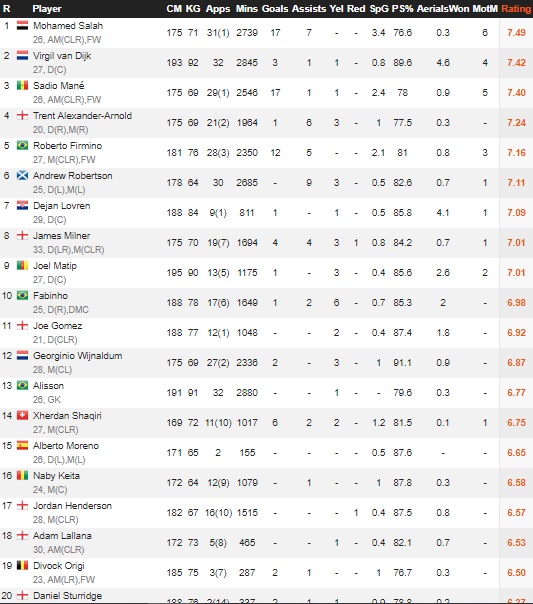 Football site WhoScored have a list of ratings for each player with players assigned a 1-10 rating based on their effectiveness and interestingly James Milner, Fabinho and Georginio Wijnaldum rate as their three highest rated midfielders, with Xherdan Shaqiri, Naby Keita and then Jordan Henderson following.

However, when looking at games played this season, Milner, Henderson and Wijnaldum have been the favourites under Klopp with Fabinho just trailing behind them in terms of games played. 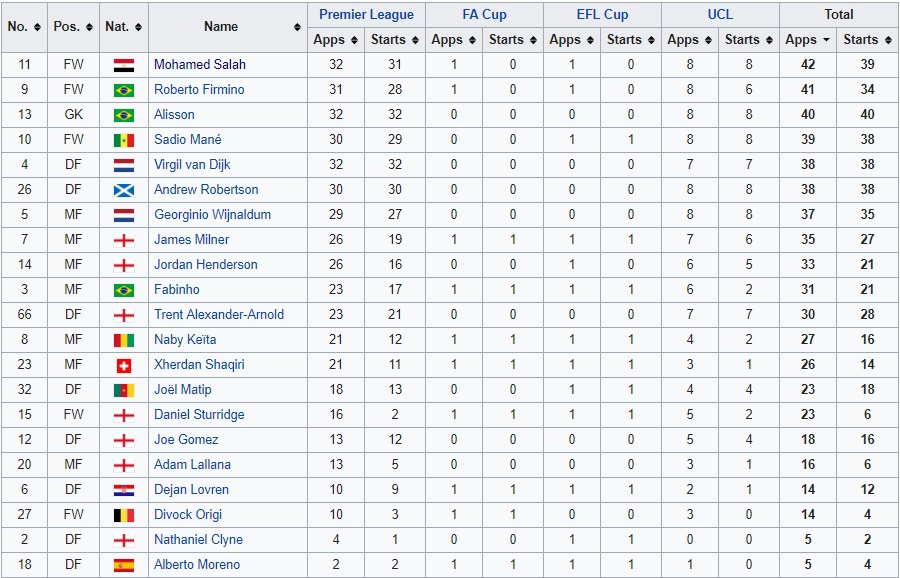 END_OF_DOCUMENT_TOKEN_TO_BE_REPLACED

Klopp has used 18 different midfield combinations this season and the Milner-Henderson-Wijnaldum triumvirate has been his most popular pairing with that trio starting 10 games alongside each other.

However, in their defence, the games that Klopp has used that trio have came against Leicester City, PSG (twice), Manchester City (twice), Chelsea, Napoli, Bayern Munich, Spurs and Southampton.

Outside of the Milner-Henderson-Wijnaldum trio, Klopp has only used two other pairings more than three times: Wijnaldum-Keita-Milner (5) and Fabinho-Wijnaldum-Shaqiri (4).

The Wijnaldum-Keita-Milner trio was used frequently at the start of the season and was quite effective with Liverpool averaging 1.8 goals per game, conceding just 0.4 goals per game, boasting 56.16% possession and 84.2% pass accuracy. They won four out of five of those games.

Meanwhile the Fabinho, Wijnaldum and Shaqiri pairing has been highly effective with Liverpool winning four out of four games and averaging 3 goals per game, conceding just 0.25 goals per game and boasting 60.9% possession and an 83% pass accuracy. All four wins came against Crvena, Fulham, Everton and Arsenal.

The fact is, while Klopp has favoured Milner-Henderson- Wijnaldum in the club's big games, particularly in Europe, he has rotated his midfield heavily this season and relied on the front three of Mohamed Salah, Roberto Firmino and Sadio Mane, the full-backs in Andy Robertson and Trent Alexander-Arnold and the reliability of Virgil van Dijk and Alisson Becker as the spine of his team.

Alexander-Arnold, who missed a number of weeks with a knee injury, has started over 70% of Liverpool's games while the other six players that form the spine have all played over 90% of the games.

Klopp's high pressing style naturally places a lot of emphasis on sprints so to some extent you can see why he rotates his midfield, and while it appears that Fabinho, Wijnaldum and Shaqiri warrant further consideration given their effectiveness when those three players have started, Fulham and Crvena aren't exactly at the level of PSG, Napoli, Manchester City and Bayern Munich.

It's more than likely that Klopp will continue to rotate his midfield as Liverpool look to get back to the last four of the Champions League but for the big games look for him to continue to stick by Henderson-Milner-Wijnaldum.

After all, why they have been statistically below average, they have lost just 20% of the games they have started and if it's not broke, why fix it?


popular
Can you name every English football club that begins with 'W'?
The SportsJOE 12 o'clock quiz | Day 106
SportsJOE 2000s Football Quiz | Round 9
QUIZ: Name the country these football teams play in
The SportsJOE 12 o'clock quiz | Day 105
How Connacht could line up after summer of massive change
Ronan O'Gara shares class Johnny Sexton story ahead of World Rugby awards
You may also like
4 weeks ago
'I never liked Eric Cantona... but he was my favourite player' - Neil Ruddock
4 weeks ago
10 Liverpool players Manchester United fans loved to hate
1 month ago
"Can you hear that? They still believe in us. We have to give them something back"
1 month ago
Liverpool's 2005 Champions League victory in Istanbul played out on Twitter
3 months ago
Liverpool fans are getting a bumper weekend of classic European games
3 months ago
Two fair ways to wrap the Premier League and give Liverpool their dues
Next Page