It was certainly a Champions League final.

You can say a lot of things about the Champions League final between Liverpool and Tottenham Hotspur: it certainly existed.

The game took place, and it ended, and no one on earth can ever deny that fact. 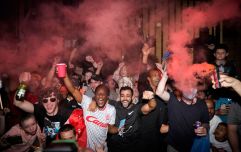 END_OF_DOCUMENT_TOKEN_TO_BE_REPLACED

Unfortunately, for the vast majority of the 90 minutes in between it was fairly insipid stuff on the Wanda Metropolitano pitch in the Spanish capital of Madrid.

Liverpool got an early goal via a Mohamed Salah penalty and sealed the win via a very late finish by substitute Divock Origi, but in the middle the entire affair was rather tepid.

Neither side got into the swing of things and both seemed either unwilling or unable to fully shake off the shackles and play their natural game.

It took Tottenham until the second half before they had a chance of note, and both teams actually went the entire game without picking up a booking.

This might not sound unusual but it is in fact the first time this has ever happened in a Champions League final since the competition rebranded from the European Cup in 1992.

Despite this, Liverpool are unlikely to truly care about yellow and red cards, because they are - after all - the champions of Europe for the sixth time in their history.


popular
"It's giving the Kerry team a bad image. They don't look like footballers, they look like gurriers." - Liveline has peaked
Bundee Aki overheard in the stands after Faf de Klerk hit on Conor Murray
Eoin Murphy's calls from the goals show Cork they're in for a completely different ball-game
Gatland on his decision to start Bundee Aki, and drop Tadhg Beirne
"That's one of the best races I've ever had" - Coscoran kicks like a demon to seize the day
The SportsJOE 12 o'clock quiz | Day 377
Warren Gatland pulls Joe Schmidt into Lions Tour refereeing drama
You may also like
2 months ago
United legends recall Alex Ferguson's words on team bus after Liverpool defeat cost league title
2 months ago
Jurgen Klopp's point about Man City exposes him to Liverpool's massive mistake
2 months ago
Jürgen Klopp defends Solskjaer's team selection calls after United defeat
2 months ago
Jamie Carragher hits out at 'lazy punditry' after Man United protest
3 months ago
Roy Keane makes Jamie Carragher remark as fans break into Old Trafford
3 months ago
Gary Lineker takes aim at Jurgen Klopp comments on protesting fans
Next Page