At the worst possible time.

Liverpool's defensive injury crisis has gone from bad to worse after Trent Alexander-Arnold suffered a foot injury during their win over Napoli in Tuesday night.

The England international will not be available for Liverpool's crucial game against arch rivals Manchester United this Sunday, and is also expected to be sidelined for next Friday's match against Wolves.

Alexander-Arnold has been wearing a protective boot after he sustained the injury during the closing stages of the Napoli game on Tuesday. 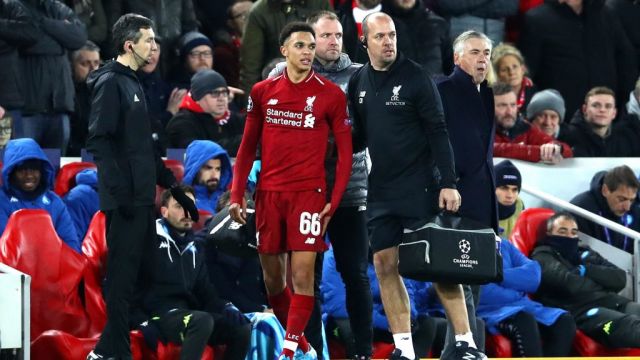 END_OF_DOCUMENT_TOKEN_TO_BE_REPLACED

Nathaniel Clyne could be set for a return, but due to his lack of match sharpness, it is more likely that vice-captain James Milner will start at right-back for the United match this weekend.

Alexander-Arnold's absence is a huge blow for Liverpool, who are already having to deal with the absence of both Joe Gomez and Joel Matip.

END_OF_DOCUMENT_TOKEN_TO_BE_REPLACED

Gomez, who can play at centre-back or right-back, suffered a fracture to his leg during Liverpool's win over Burnley at Turf Moor, while Matip injured his collarbone against Napoli.

A back four of Milner, Lovren, Van Dijk and Robertson looks nailed on to start against United this Sunday. If any more defenders get injured, Klopp may have to promote players from the youth team or move the likes of Fabinho back into defence.


popular
Roy Keane flew home from Qatar World Cup as 'fellow pundits were getting on his nerves'
World Cup 2022 Day 20: All the major action and talking points
Talksport presenter puts Martin O'Neill to the pin of his collar over Declan Rice and Jack Grealish
Roy Keane reveals what he wrote about England during Senegal game
Rory McIlroy explains 'falling out' with Shane Lowry that lasted a few years
World Cup Power Rankings: The top 10 players at the tournament ahead of the quarter-finals
Eniola Aluko responds to criticism after on-air mistake on ITV
You may also like
4 weeks ago
James Milner's progress report as a 12-year-old still stands true 20 years on
1 month ago
How basic modern sports science would have saved Michael Owen's career
1 month ago
Trent Alexander-Arnold makes great point to those who criticise his defending
1 month ago
Jordan Henderson reveals how Roy Keane clash had him "dripping with sweat"
1 month ago
Jamie Carragher responds to Virgil van Dijk's claim that he wouldn't start in this Liverpool team
1 month ago
FA 'very concerned' about rise in number of Hillsborough chants
Next Page