Steven Gerrard looks to have been replaced by two midfielders in the past week by Liverpool boss Brendan Rodgers. If one of them turns out to be 80% as good as the outgoing Reds skipper, Rodgers will have done well.

The 21-year-old Croat impressed with Roberto Mancini's Inter last season but has apparently told teammates at the Italian club that he has played his last game with them.

END_OF_DOCUMENT_TOKEN_TO_BE_REPLACED

Vecernji believe Kovacic will be in a Liverpool jersey next season, once the Premier League side and Inter can agree on a transfer fee.

Liverpool's first offer, of €19 million, was rejected and a second, of €21m, is being considered. The newspaper feel, however, that Inter are holding out €25m - the same figure that secured Dejan Lovren's services, from Southampton, last summer. 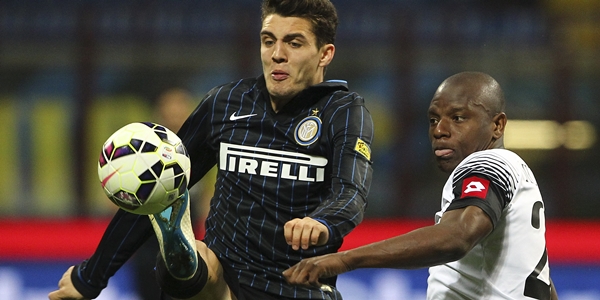 Rodgers is currently on the hunt for centre midfielders that can fill the gap left by Gerrard. On Thursday, the club announced they had signed James Milner on a free transfer. The English player will move to Merseyside over the summer, once his contract at Manchester City expires.

END_OF_DOCUMENT_TOKEN_TO_BE_REPLACED

In 2010, Kovacic became the Croatian league's youngest ever player when, at the age of 16, he made his Dinamo Zagreb debut. He scored in that game, which Dinamo won 6-0.

Here is the obligatory YouTube video with dance soundtrack:


popular
Man United could be blocked from playing in the Champions League next season
Ireland team vs. France: Form players rewarded and a welcome return
Eight players to watch in tonight's Sigerson Cup semi-finals
French media's opinion of this Ireland team becomes clear as vital clash nears
Clive Woodward happy to 'eat humble pie' after bold comments about Ireland
Lionel Messi makes decision on Barcelona return
"I should have been more mature" - O'Sullivan's injury trail a cautionary tale for Sigerson casualties
You may also like
1 week ago
Former England captain says Fabinho should have sent off for Evan Ferguson challenge
1 week ago
Former Liverpool midfielder Emre Can reveals he had surgery for cancer
2 weeks ago
Liverpool reportedly selling Caoimhin Kelleher for Jude Bellingham funds
2 weeks ago
Steven Gerrard offers his personal service to help Liverpool sign Jude Bellingham
2 weeks ago
Steven Gerrard makes interesting claim about Graham Potter's signings
3 weeks ago
Liverpool's owners have made a massive decision on the sale of the club
Next Page