Let me tell you something: Bruno Fernandes can kick a football

I mean really kick it. He will kick the fucking living shit out of it.

Look at the goals he has scored this season. LOOK AT THEM.

Left foot, right foot, the occasional header... inside the box, miles outside of it... Bruno Fernandes really is a player who can sit in a restaurant, confidently order his dinner, and then finish it. And dessert too. And then maybe a shot of espresso or two before he leaves. AND he tips generously. I bet. I don't know. But I do, really. I'm sure he does. You'd hope so, wouldn't you?

Anyway, the point is Liverpool Football Club, current Champions League holders, are looking to add the foot-like-a-traction-engine Portuguese midfielder to their ranks for next season.

And the additional point is that Fernandes, the current captain of Sporting Lisbon and now a UEFA Nations League winner, is fluttering his eyelashes back in their general direction. Speaking on the De Cadeirinha podcast last month, the player admitted his admiration of Jurgen Klopp's side.

“When they don’t have ball possession, they are more intense.” 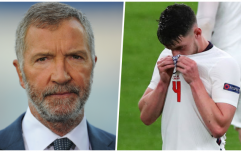 END_OF_DOCUMENT_TOKEN_TO_BE_REPLACED

According to the Lisbon tabloid Correio de Manha, the most-circulated daily newspaper in Portugal, the Reds are “looking for an opportunity” to sign the attacking midfielder in return.

The paper does add, however, that the Champions League runners-up Tottenham Hotspur are, ostensibly, in pole-position to sign the Portuguese international. Manchester United are said to be dead-set on the pup too.

Whatever happens, and indeed, whichever club Fernandes does join this summer - Pep Guardiola's Manchester City have also been rumoured to be interested in the player in the past - I think I can speak for everyone when I say this: it would be an absolute pleasure to see him come over here, to the Premier League, and twat footballs in from impossible distances.

To all the banger merchants: come one, come all. We miss you and we love you. The Premier League is a lot worse for your absence.

popular
Gary Neville cautiously optimistic about England, but Roy Keane sums it up perfectly
Only old-school fans will get 20/20 in this 1990s footballers quiz | Part 2
Comparing the training gear of the Kerry 1980s team to a modern day outfit
The SportsJOE 12 o'clock quiz | Day 370
"For me, there is no comparison between Con O'Callaghan and David Clifford"
QUIZ: How much do you know about Dutch football?
Danny Murphy's comments on BBC tonight prove some folks will never learn
You may also like
1 month ago
United legends recall Alex Ferguson's words on team bus after Liverpool defeat cost league title
1 month ago
Jurgen Klopp's point about Man City exposes him to Liverpool's massive mistake
1 month ago
Jürgen Klopp defends Solskjaer's team selection calls after United defeat
1 month ago
Jamie Carragher hits out at 'lazy punditry' after Man United protest
1 month ago
Roy Keane makes Jamie Carragher remark as fans break into Old Trafford
1 month ago
Gary Lineker takes aim at Jurgen Klopp comments on protesting fans
Next Page