"I'd much rather have my pair than their pair."

Back in 1988, Jack Charlton took his Ireland team to their first ever European Championships. Injury meant Liam Brady did not make the cut, but he jumped at the chance to travel to West Germany with the squad.

For Ireland's opener, as fate and the Euro 88 draw would have it, they would face England, with whom Charlton had won the World Cup with, in 1966. Added to the mix was the fact that Carlton had been snubbed by the English FA when he expressed an interest in taking over with the national team.

END_OF_DOCUMENT_TOKEN_TO_BE_REPLACED

As it stood, the former Leeds and England star took over with the Republic of Ireland in 1986 and led them to their first ever major tournament at the first time of asking.

With only eight teams competing at the Euros, back then, it was never going to be easy for Ireland. When they were drawn with England, the USSR and The Netherlands, few saw a path for them to reach the semi-finals. Much would hinge on that opener with Bobby Robson's England, a side that had reached the World Cup quarter finals two years previous.

As part of their coverage of the game, ITV had another man that had long coveted the England job back in their studios. Brian Clough was 13 seasons into a long stretch at Nottingham Forest that had seen him win a league title and two European Cups.

Ahead of the game, Clough was highly dismissive of Mick McCarthy. So much so that ITV's host remarked Clough had just delivered the dressing room speech for Ireland. Clough declared:

"I'm glad, from an English point of view, that the Irish centre-half [McCarthy] is fit... I don't think he's international class, for a start, and I would have thought Peter Beardsley and Gary Lineker would be rubbing their hands.

"In fact, if they could have got together a few Deutschmarks to make sure he'd be even fitter, still, I think they would have slipped him a few. England want him in." 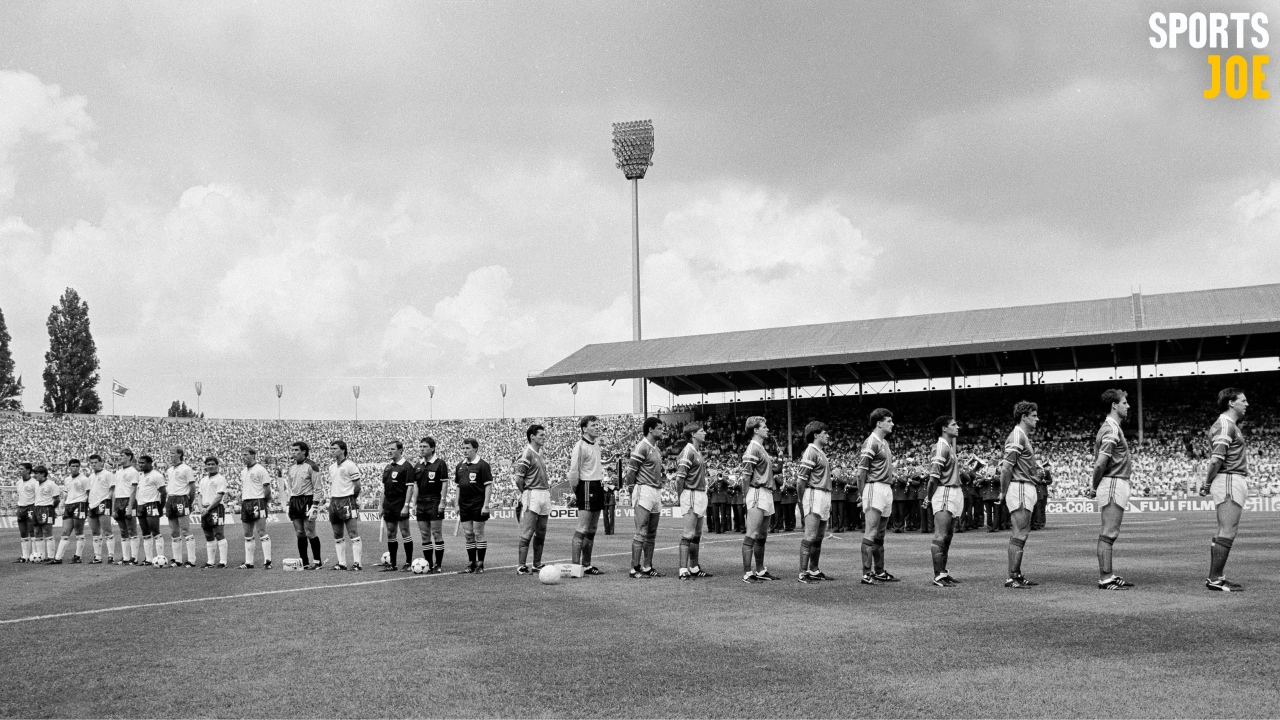 END_OF_DOCUMENT_TOKEN_TO_BE_REPLACED

The English side was packed with talent. They had one of the world's best goalkeepers, in Peter Shilton, a solid defence marshalled by Tony Adams, the likes of Chris Waddle, John Barnes and Bryan Robson in midfield and, as mentioned by Clough, a menacing front two of Beardsley and Lineker [they would end up with 57 international goals between them].

Ireland may have been taken lightly by many pundits, back then, but they had quality operators too - Liverpool midfielders Ronnie Whelan and Ray Houghton, Manchester United's Paul McGrath and Frank Stapleton leading the line.

Ireland got off to a brilliant start when Houghton headed past Shilton. England surged forward for a response but were repelled by the Irish defence and their goalkeeper, Packie Bonner.

With Ireland leading 1-0 at the break, ITV threw to Brady at the game for his take on the opening 45 minutes. The West Ham midfielder, who had picked some some punditry work at the tournament, lit into Clough.

"Mick's not the greatest player on the floor, but he's won everything in the air. We're giving them problems."

Brady was showing no deference to the veteran manager, especially when he felt one of his teammates, McCarthy, had been slighted.

As it happened, the Irish defence marshalled by McCarthy went on to keep a clean-sheet as England were defeated 1-0. 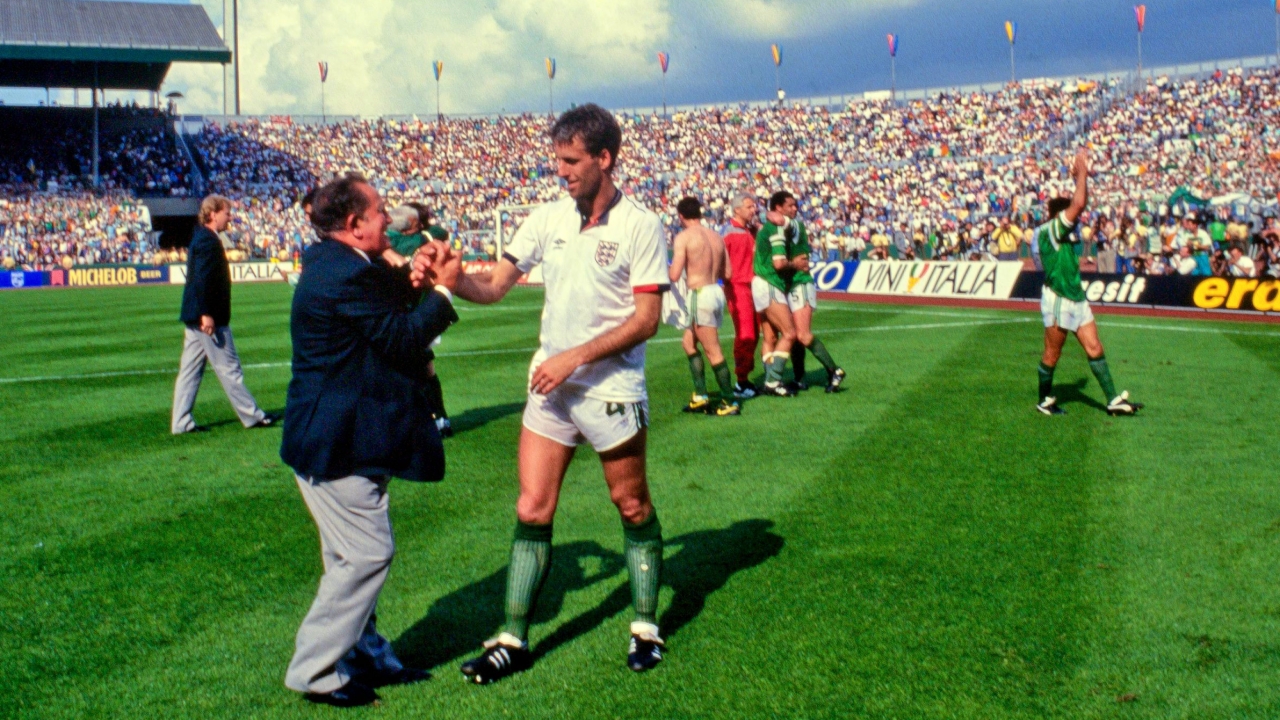 Ireland went on to draw with the USSR but narrowly missed out on the semis when they lost to a Wim Kieft goal against the Dutch.

England, with their star-studded squad, were also eliminated at the group stages. Both sides would face each other again, at Italia 90, two years later and share the spoils as they headed towards runs in the knock-out stages.


popular
It's often forgotten that Tommy Walsh began his career with the same stardom and promise as David Clifford
Paul Scholes calls a spade a spade after comeback win
Derry club win county final factfile games with extravagant set of jobs
Jordan Larmour primed for a season to remind everyone how good he is
Shane Walsh: 'That's not how I was coached to play football. No one was coached to play football that way'
Paul Scholes says Paul Pogba is a "daydreamer" and Fred and McTominay are "limited footballers"
Galway fans' frosty reception for Davy Fitz doesn't make any sense
You may also like
1 week ago
Claiming Callum Robinson has 'silenced his critics' with goals misses the point
1 week ago
Chiedozie Ogbene gives a brilliant interview after leaving Nemo Rangers behind to chase soccer dream
1 week ago
Callum Robinson performance shows Ireland what could have been
1 week ago
Adam Idah ready to play, but Ireland hit with late blow ahead of Azerbaijan clash
2 weeks ago
The Ireland XI that should get a much-needed victory in Azerbaijan
2 weeks ago
Callum Robinson says he is not vaccinated, despite having COVID twice
Next Page