Leeds' bid for automatic promotion looks to be over

Leeds United's hopes of sealing automatic promotion were dealt another significant blow on Monday as they lost 2-0 to Brentford at Griffin Park.

Having fallen behind to Neal Maupay's opener at the end of the first half, Leeds conceded again shortly after the hour mark - Sergi Canos scoring what proved to be the final goal of the game.

END_OF_DOCUMENT_TOKEN_TO_BE_REPLACED

Though Leeds have games against Aston Villa and Ipswich Town remaining, it looks increasingly likely that they will have to secure promotion back to the Premier League after a 15-year absence via the play-offs.

If they finish third, Leeds will face the team that ends the Championship season in sixth for a place in the play-off final. As things stand, that would mean taking on Derby County, who moved back into the play-off places thanks to two stoppage time goals from Harry Wilson against QPR.

Here's how the top of the table stands at the moment. 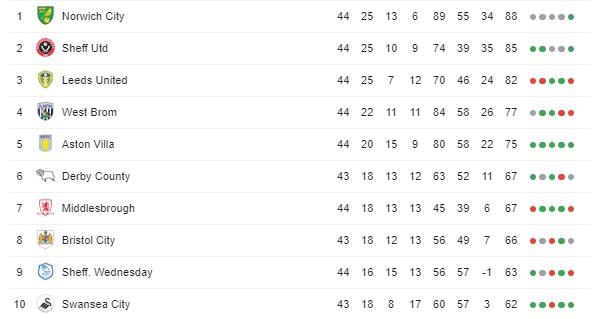 Leeds have beaten the Rams twice already this season, the last meeting finishing in a 2-0 win at Elland Road in January. Their win that night came after Bielsa had admitted he was behind the 'spy-gate' incident at Derby's training ground, a story which generated plenty of headlines.

Derby boss Frank Lampard made his feelings known about that incident at the time - and about the press conference Bielsa later scheduled to explain how he prepares to face opponents.

Though much can change in the final two rounds of Championship fixtures, plenty of football fans on Twitter already seem excited by the prospect of the two sides meeting again with so much at stake.

Leeds v Derby in the play offs. Lampard gonna pull off a masterclass after Spy Gate earlier this season.

After all the fuss earlier, would be very ironic if Leeds ended up playing Derby in the play offs @dayko_uk 😂😂 #SpyGate

Leeds v Derby in the play-offs should be good