Madrid had previously given PSG an ultimatum

Kylian Mbappé now looks likely to stay at Paris Saint-Germain for the final year of his contract after the club failed to come to an agreement with Real Madrid.

Madrid has submitted two huge bids for the forward, the latest of which was €170 million with an extra €10 million in add-ons. Frustrated with a lack of cooperation from PSG, Madrid also gave them an ultimatum to accept an offer - Sunday night being the cut off point. 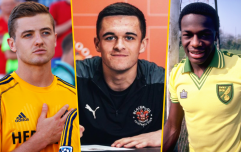 END_OF_DOCUMENT_TOKEN_TO_BE_REPLACED

But PSG held firm, rejecting a bid despite the prospect of Mbappé leaving for free next summer when his contract expires. Having an endless pot of money does help, I suppose.

On Monday evening, news broke from Telefoot journalist Julien Maynard, who tweeted: "Real Madrid stopped negotiations with PSG. Barring an unlikely turnaround, Kylian Mbappé will not join Real Madrid by the end of this transfer window."

END_OF_DOCUMENT_TOKEN_TO_BE_REPLACED

Mbappé's desire to move to Real Madrid is no secret, but his desire to join Los Blancos has not stopped him from hitting the ground running at the start of the Ligue 1 season, with the strike bagging three goals in his first four games.

The Madric-centric Media in Spain have built up hype around Mbappé to intolerable levels in recent days, with late night discussion show El Chiringuito host Josep Pedrerol criticising the 22-year-old for... playing well against Reims.

Can't wait for tonight's show. I'm sure they will discuss this news with nuance and maturity.


popular
Rangers legend says he and Roy Keane didn't speak during Man United spell
Patrick Vieira appears to kick fan after Everton defeat
Rory McIlroy response to doubters on his final hole was such a relief
Your guide to a huge weekend of sport and how to watch it all
The coolest customer in hand-ball hoping to carry on the family tradition for Kilkenny
PSG offer Kylian Mbappe 'complete control' with insane contract offer
Boris Johnson slams Jurgen Klopp for defending Liverpool fans booing national anthem
You may also like
3 days ago
Blackpool's Jake Daniels publicly comes out as gay
3 days ago
Boris Johnson slams Jurgen Klopp for defending Liverpool fans booing national anthem
3 days ago
Erik ten Hag criticised after 'tone deaf' Marc Overmars comment
3 days ago
QUIZ: Can you name these 26 Premier League winners?
3 days ago
Pep Guardiola reveals what he said to Mark Noble during touching embrace
3 days ago
Chelsea team-mates 'shocked' as Andreas Christensen reportedly refused to play in FA Cup final
Next Page