Kompany's has one stipulation for his BBC Euro 2016 appearances

Vincent Kompany will be on punditry duty for Euro 2016.

The Manchester City and Belgium captain will miss the finals through injury, but will still be in France as part of the BBC's coverage, according to Belgian media.

However, he won't be providing any insight into the Belgian team, as Kompany won't be on punditry duty for any of the Red Devil's games.

Belgium, one of the favourites for the tournament, are in Group E alongside Italy, Sweden and the Republic of Ireland, and begin their campaign against the Azzurri on June 13 in Lyon. 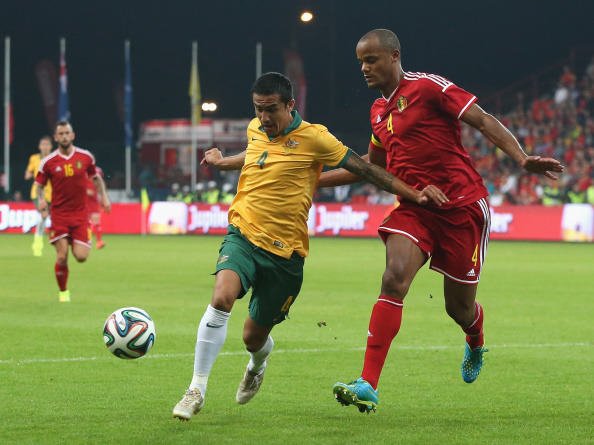 Kompany, who is set to cover six games for the BBC, will join their punditry team which already includes Alan Shearer, Rio Ferdinand, Robbie Savage and Thierry Henry in France, with Gary Lineker hosting.

It seems somewhat strange that the Belgian captain won't be covering his side's games, considering he has such a unique position amongst the pundits and could offer unrivalled insight into the team.

However, Belgian media are reporting that Kompany wants to attend Belgium's games and support his teammates. Which is fair enough, but it also means viewers will be relying on Savage and Henry to offer insight into the the Red Devils.


popular
The SportsJOE 12 o'clock quiz | Day 189
QUIZ: Guess the footballer from their Wikipedia page #11
"My job at Sky is not to be a cheerleader for Rory McIlroy" - Paul McGinley
Conor McGregor shares DMs from Dana White to justify boxing comeback
QUIZ: Can you guess the football shirt sponsors of these classic 90s kits?
The SportsJOE 12 o'clock quiz | Day 188
QUIZ: Can you name every top European football club that begins with 'L'?
You may also like
1 year ago
Jon Walters on Ireland's 'French Foreign Legion' security at Euro 2016
2 years ago
Every step the English hype train is about to take ahead of the World Cup
2 years ago
Cristiano Ronaldo story shows how far Robbie Brady has come
2 years ago
An insane amount of people watched Wes Hoolahan's goal against Sweden
3 years ago
Ranking Ireland's home jerseys of the last three decades
3 years ago
QUIZ: You have ONE minute to name the Ireland team that played Sweden at Euro 2016
Next Page