Caoimhin Kelleher is having fun at the moment

With Brazilian number one Alisson on the sidelines, and the usual deputy Adrian out of favour, Caoimhin Kelleher has stepped into the Liverpool net with a ridiculous level of assuredness.

The Cork-native claimed a clean sheet in his debut last week against Ajax in the Champions League, and on Sunday was once again named in goal for Liverpool's home league match against Wolves. 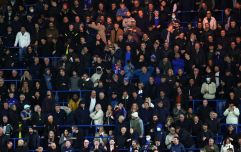 END_OF_DOCUMENT_TOKEN_TO_BE_REPLACED

Once again, he displayed a level of calm and authority and once again he kept a clean sheet. After such a performance, young footballers are urged to keep their feet on the ground. To not get ahead of themselves. Thankfully for Kelleher, a mix up with his shirt in the first half probably ensures that that's exactly what will happen.

Lots of positives again for @LFC, including an excellent display from their young keeper. Perhaps as a reward they could spell Kelleher correctly. 🤣 pic.twitter.com/9NbfZJwsmJ

That's because whoever was in charge of printing his name on the back of his shirt unfortunately forgot how to spell it, meaning his goalkeeper's shirt had the name 'Kellher' on it. 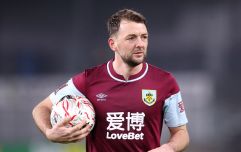 END_OF_DOCUMENT_TOKEN_TO_BE_REPLACED

Thankfully, the problem was remedied at half-time, and by the time the final whistle blew, he was able to celebrate another top performance in a shirt which had his actual name on it.

On the night, the former Ringmahon Rangers player became the 16th Liverpool goalkeeper to keep a clean sheet in the Premier League, and after two impressive back to back performances, he's being tipped to hold onto that jersey a little while longer, with the Pool taking Midtjylland away in the Champions League on Wednesday night.

"That’s what I’m there for!” Kelleher said afterwards.

“I’m just trying to be there for the team to help them out in those moments and thankfully again I was able to make those saves and get the clean sheet.

“To get the clean sheet, for me and the back four, is the most important thing for us. We’ve done our job then.”


popular
Inbetweeners star sends All-Ireland semi-final message to Derry cult hero
Erik ten Hag 'accepts' Man United's decision about Cristiano Ronaldo
"Jesus they never shut up, do they?" - What it was like training under Rory Gallagher and Jim McGuinness
"Sometimes a manager has to make those bold and tough calls." - Kerry's Paudie Clifford conundrum
Local press follow the All Blacks but miss out on Tadhg Furlong show
Tariq Lampety switches international allegiance ahead of Qatar World Cup
Only die-hard rugby fans will get full marks in our Ireland vs. All Blacks quiz
You may also like
6 days ago
Southampton pay tribute as Shane Long leaves the club after eight years
6 days ago
Mike Dean comes out of retirement to become Premier League VAR official
1 week ago
Man United transfer troubles continue as Erik ten Hag's budget is 'capped'
2 weeks ago
Steve McClaren issues warning to Man United players
2 weeks ago
Newcastle United close in on signing Burnley goalkeeper Nick Pope
2 weeks ago
Josip Juranovic may depart Celtic as Premier League clubs chase transfer
Next Page