The praise is well deserved

The AC Milan defender, as well as the Denmark national team's medical staff, were awarded the 2021 UEFA President’s award for their quick reactions in order to save the life of Christian Eriksen, who suffered a cardiac arrest during Denmark’s group stage match against Finland on 12 June.

Ahead of Liverpool's Champions League opener against Milan on Wednesday night, the Liverpool boss used his pre-match column to praise the life-saving actions of both Kjaer and the medical staff involved.

"I am usually more keen to focus on my own players rather than an opponent, but tonight I must make an exception," said Klopp.

"This evening it is possible that Simon Kjaer will line up against us and this is a person who I think has the respect of the entire football and sporting world.

"You recognise true leadership in a crisis. I think the world acknowledges this now more than ever with everything that goes on around us.

"Like millions of others, I was rocked by the scenes that unfolded at the European Championships in the summer when Christian Eriksen fell ill during Denmark's opening group game.

"There were many heroes that night, not least of all the remarkable medical professionals for the Danish national team, in the stadium and subsequently at the hospital. But Simon shone that traumatic day for his own conduct.

"The image of the Danish players shielding their teammate as he was cared for will, in my opinion, forever be one of the most iconic in sporting history. It showed the best of humanity. Compassion, care and love for their friend.

"Honestly, I have no idea how he managed to not only keep his own composure in that situation, but to have the clarity of mind to make the decisions he did in that moment. His conduct humbles us all." 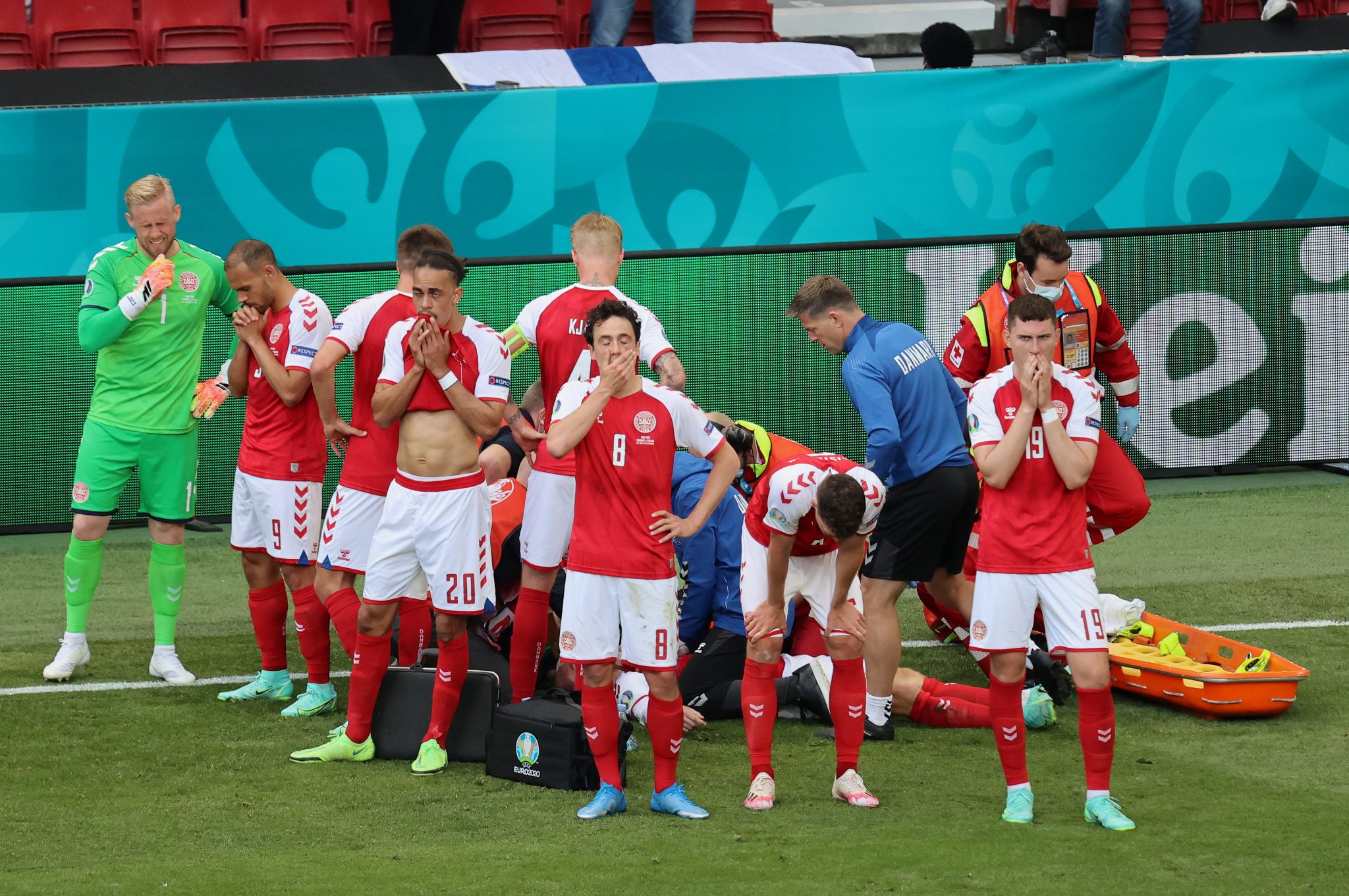 The Denmark players formed a ring around Eriksen as he was being treated by medics. (Getty Images)
Advertisement

"I'm told that Simon's dad is an LFC fan – and if that is the case he must be bursting with pride that his boy is now recognised worldwide as the epitome of our anthem You'll Never Walk Alone," Klopp added.

"I know our supporters are knowledgeable and generous of spirit and therefore I am sure Simon will feel the gratitude of the home crowd tonight, but for the 90-plus minutes of the game he is again the opponent.

"It will be so cool just before kick-off to hear that Champions League anthem and see the players lined up in front of a full Anfield. We missed supporters for every second of every game during the pandemic, but I must admit it was most acute on the European nights.

"Let's have all the noise, all the colour, all the positive energy and all the passion and intensity that is our trademark. Let's give this fixture the stage it deserves. I honestly cannot wait."

The comments made by the Liverpool boss, which were written before Liverpool's win at Leeds United on Sunday, are a true show of admiration for the heroic actions demonstrated by Kjaer and all others involved.


popular
The four stone-cold certainties for All-Stars even as early as this
Eamon McGee just couldn't help himself with Armagh-melee tweet
Kylian Mbappe reportedly wants PSG to sell Neymar
"He's actually smiling putting the ball over the bar. He should nearly be fainting." - Ryall on Limerick's legacy
Full Ireland player ratings after Maori All Blacks teach us an early lesson
'Does not look too good' - Andy Farrell offers worrying injury update on Cian Healy and James Hume
Frenkie de Jong 'determined to stay' at Barcelona, despite Man United agreement
You may also like
2 days ago
Thibaut Courtois gets 'brick wall' tattoo to celebrate Champions League Final heroics
3 days ago
Conor Gleeson's gesture to heartbroken Ethan Rafferty a tonic after sideline brawl
3 days ago
Damien Comer targeted in brutal, chaotic Armagh and Galway brawl
3 days ago
QUIZ: Name every club to play in the Champions League
3 days ago
Malcolm Ebiowei 'ignored Erik ten Hag text' before signing for Crystal Palace
3 days ago
Roy Keane makes good on bet after seeing Cork fall to Dublin
Next Page