The Liverpool boss was not having a bar of it.

Jurgen Klopp acted swiftly to assure Liverpool fans that Roberto Firmino's season was not over and, while he was at it, he cut down a rumour about his relationship with star forward Mohamed Salah.

Klopp was speaking with the BBC after his Reds side defeated Huddersfield 5-0 at Anfield to go top of the Premier League table, on 91 points. Liverpool could potentially finish the season on 97 points and still miss out on the title to Manchester City, who play Burnley on Sunday.

Klopp's side went into the Friday night league encounter without the services of Firmino but still had Sadio Mane and Salah in the XI. That duo combined to score four of their side's five goals and, as Dion Fanning noted on The Football Spin [from 4:00 below], they have equalled a league record set by Luis Suarez and Daniel Sturridge five seasons ago.

Liverpool have four fixtures left in their season and the potential of a fifth if they can overcome Barcelona in the Champions League semi finals.

Their European challenge faltered down the closing straight, last season, and Liverpool fans still rue the shoulder injury that saw Salah leave the pitch in the first half of their final loss to Real Madrid. 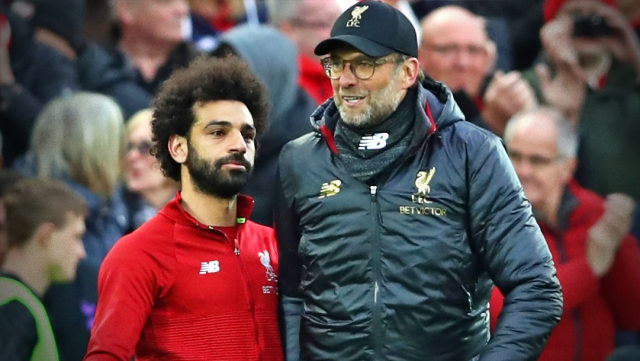 Reds supporters will be dearly wishing Firmino will be available for the run-in.

Asked by the BBC if the rumours of Firmino having a season-ending injury were true, Klopp did not mess about. Harking back to a story that was recently reported - about Salah and Klopp having a falling out - Klopp declared:

"Wow! I always tell you don't believe 3% of what's on social media. So, let's start with that.

"I had no argument with Mo Salah. Especially not after the Chelsea game. I have no clue why that should have happened.

"Ad Roberto Firmino is not out for the rest of the season."

It will be interesting to see if Firmino does take the field against Barca in the semi final first leg.

popular
The SportsJOE 12 o'clock quiz | Day 144
Portumna prodigy streaks to eight shot Irish Boys win with bogey free round
"No doubt he'll say he played shit like he normally does, but I thought it was a good game."
SportsJOE 2000s Football Quiz | Round 12
There's a very simple reason why PSG have signed Maxim Choupo-Moting
The SportsJOE 12 o'clock quiz | Day 143
Brooks Koepka puts PGA Championship leaders on notice with final round comments
You may also like
2 days ago
QUIZ: Name every 2019/20 Premier League goalscorer from Scotland
2 days ago
QUIZ: Can you name every Irish goalscorer from the 2019/20 Premier League?
4 days ago
Leicester interested in Barcelona youngster with €500 million buy-out clause
5 days ago
Premier League referees to use pitch-side monitor for VAR next season
2 weeks ago
QUIZ: Name the 25 clubs relegated from the Premier League more than once
2 weeks ago
Best players since Premier League restart won't feature in PFA awards
Next Page