Burnley felt they could make the Liverpool goalkeeper uncomfortable at set-pieces, and so it proved.

The scenes at full-time, on Saturday, as Jurgen Klopp and Andy Robertson let the match officials have both barrels were more evidence of Liverpool refusing to cruise to the end of a league-winning season.

Alisson Becker has yet to lose a league game at Anfield since he signed for Liverpool. On Saturday, he extended that record... but it was nip-and-tuck in the closing stages.

Liverpool moved to 93 points in their league-winning campaign after drawing 1-1 with Burnley. The Reds went 1-0 up through Andy Robertson's first half header but they were pegged back by Jay Rodriguez in the second half and came close to losing when Johann Berg Gudmundsson struck the crossbar in the closing moments.

Burnley's equaliser had come from a set-piece as a long ball forward was headed on and not cleared properly before Rodriguez fired home low. In the closing stages, Alisson had two bites at getting crosses claimed, or cleared, but failed. Gudmundson could not keep his strike down and Burnley were left cursing that they had not claimed all three points of a game that saw them under the pump for long spells.

Following the game, Liverpool boss Jurgen Klopp approached referee David Coote and his officials. While Robertson was berating them for a missed penalty call, in the second half, Klopp wanted greater protection for his No.1.

Klopp, in his press conference, expanded on that complaint. "I didn't speak about the Andy Robertson situation," he began, "because I didn't see it. I saw it after the game.

"Look, I spoke about the goalkeeper situation. I feel like we've lost the game, even though we didn't. And maybe that's not the best time to talk about these things... but how can you let it constantly happen with a goalie, when a corner comes in, that three players are allowed to block him? That's not how it should be.

"But, for the ref, he saw it as not a foul and not a problem and that was why he didn't whistle in these situations. And I told him about that." 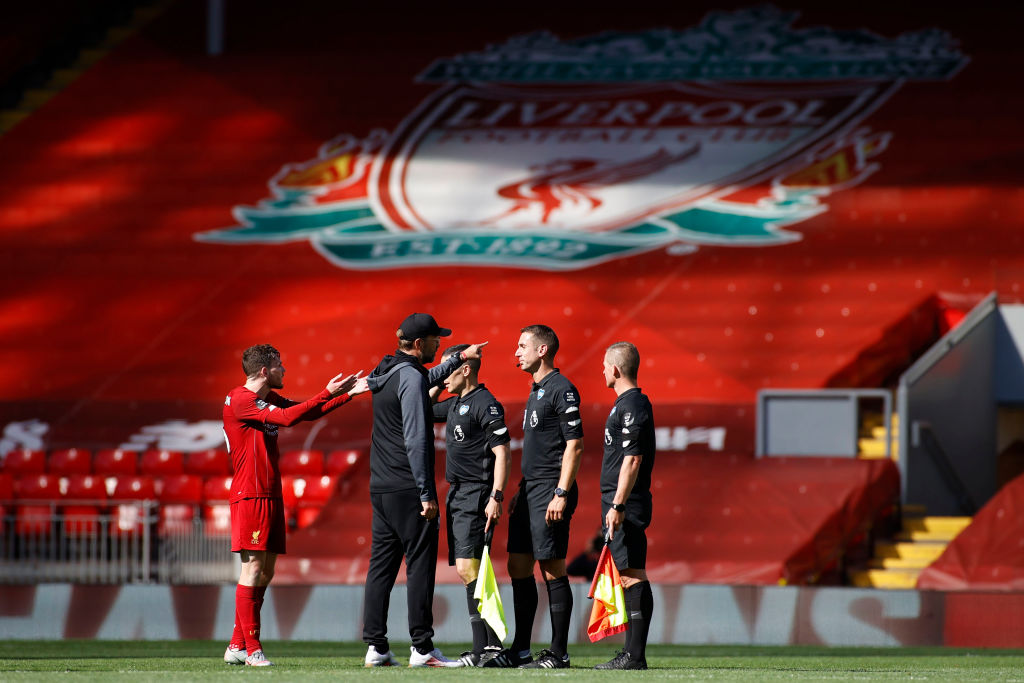 Andy Robertson and Jurgen Klopp gets their point across to referee David Coote after Liverpool's draw with Burnley. (Photo by Phil Noble/Pool via Getty Images)

As Klopp was admonishing the officials, Robertson was letting them have an earful about their failure to award what looked like a clear penalty when they were 1-0 up.

That draw does leave Liverpool on course to surpass the 100-point mark if they can win their three remaining league games.

Klopp was asked, during his press briefing, about Roberto Firmino not scoring in the league at Anfield all season. "It cannot become a psychological problem," the German remarked, "because Bobby had a great game and we don't judge him. So I hope we will not read your newspaper and [see] you making a story of it."


popular
The SportsJOE 12 o'clock quiz | Day 291
Roy Keane story shows the power he had at Manchester United
Three players locked in Ireland jerseys after Thomond Park trial
McGregor admits shout from Dustin Poirier's corner got inside his head
Jolie Poirier certainly let her voice be heard after her husband's win over McGregor
How Declan Rice pursuit contributed to Frank Lampard's Chelsea sacking
McGregor's first words to Poirier after defeat show where the damage was done
You may also like
3 hours ago
Middlesbrough player left bleeding after kick to head, somehow denied penalty
3 hours ago
How Declan Rice pursuit contributed to Frank Lampard's Chelsea sacking
5 hours ago
Lampard will always be a Chelsea legend, it was just too much too soon
6 hours ago
Ireland's best XV to face Wales after 2021 Six Nations squad calls
7 hours ago
John Cooney the latest Ulster face not to fit in Ireland's set-up
8 hours ago
Abramovich pens heartfelt statement on Frank Lampard sacking
Next Page