Tottenham boss Jose Mourinho has described an Instagram post by Gareth Bale which suggested he was fit enough to play in their midweek FA Cup tie with Everton was a "contradiction of reality".

Bale, who returned to Spurs on loan at the start of the season, has rarely featured in recent weeks with reports claiming the London club are "losing patience" with the Welshman.

While injury has explained some of his more recent omissions, it was expected Bale would feature in Mourinho's squad for the game at Goodison Park after his Instagram post indicated he had had a "good session" prior to the team's departure for Merseyside. 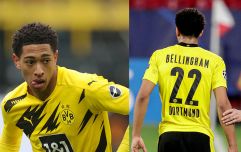 Why Jude Bellingham wears the No. 22 jersey

END_OF_DOCUMENT_TOKEN_TO_BE_REPLACED

Mourinho admitted that there was no indication that Bale himself was responsible for the post, which he also described as being "totally wrong", but confirmed the 31-year-old may feature against Manchester City on Saturday if he came through Friday's training session without any setbacks.

"I have to admit that his post created a need of being addressed. There was a contradiction between the post and the reality," Mourinho said.

"Since the beginning of the season, in relation to everything, I've tried to be very private and keep everything indoors but I felt that I needed to address the situation.

"Probably the post was not even his responsibility, but it was showing that training session was 'great' and 'I'm ready' which was totally wrong. So when questioned I had to give the reality of things."

"I repeat for the last time," Mourinho continued. "He was not feeling good. He asked for a scan. He had a scan. The scan did not show an injury but his feelings were still there. But as coaches, medical people, we can never go against the player's feelings.


popular
"Twas often I felt like firing a boot at him' - Micko's words of consolation didn't go down well in Cork
The SportsJOE 12 o'clock quiz | Day 328
"I couldn’t speak, but Rhys could see that something serious was going on"
Springbok star Eben Etzebeth's lockdown workout would break most of us
Endearing Keith Earls story proves he will never forget his roots
Eric Cantona confirms famous Roy Keane story about him
Why Jude Bellingham wears the No. 22 jersey
You may also like
1 day ago
Man United to explore using Jesse Lingard as makeweight in Declan Rice deal
1 day ago
Newcastle United fans launch bid to buy stake in the club
3 days ago
Even match officials fawning over Erling Haaland as linesman gets his autograph
3 days ago
Sergio Aguero 'tempted' by move to Premier League rivals when he leaves Man City
3 days ago
Agbonlahor recalls Roy Keane reaction to Aston Villa training ground fight
4 days ago
WATCH: All the best La Liga goals from week 29
Next Page