Southampton captain Jose Fonte has handed in a transfer request, prompting talk that he could move to Manchester United in the January transfer window.

Fonte was part of Portugal's victorious Euro 2016 squad, has been linked with both Manchester United and Liverpool in recent months.

The 33-year-old has been on Southampton's books since 2010, joining the club when they were in League One. He has made more than 250 league appearances for them. 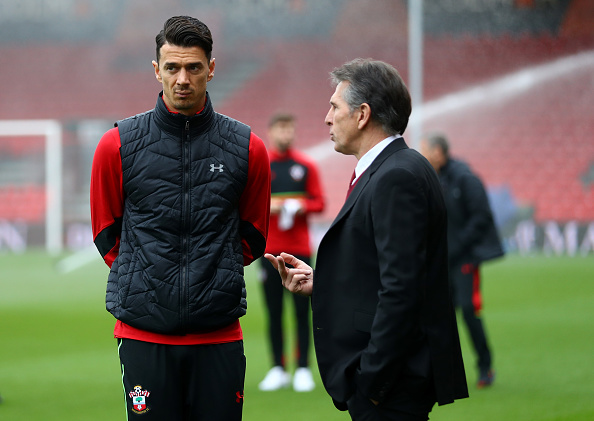 And the BBC quote Saints director of football Les Reed, who explained:

"He's made it very clear he would like to explore the opportunities for a transfer."

"That's where we are at the moment, José wants to leave the club. He's formally asked for a transfer," Reed added.

Fonte's contract does not expire until the summer of 2018, but United and Liverpool fans are already getting excited about the prospect of adding the experienced centre-back to their ranks.

United could use cover while Eric Bailly is away at the Africa Cup of Nations.

Jose Fonte hands in transfer request, I wouldn't mind if Jose Mourinho put in a cheeky bid for him....

But Liverpool have a tendency to raid the south coast for talented players. Sadio Mane, Nathaniel Clyne, Adam Lallana and Lovren have all made the move from Southampton to Merseyside in recent seasons.

Naturally, that talk has only continued in the light of Fonte's transfer request.

Well.. you know what that means pic.twitter.com/rB2fHgXX0b

With @TiagoIlori4 agreeing a move to reading and Fonte handing in a transfer request, surely @LFC will put a bid in? Nothing extortionate.

Liverpool are thought not to be desperate to add a defender to their ranks, especially with Joel Matip shunning AFCON to help the Reds domestically.

However, the availability of a player with whom many squad members are familiar could allow them to make an exception.


popular
Jose Mourinho is the picture of happiness and health after Spurs sacking
'Make him hurt, make him yours' - How the Springboks ruled the world
In 86 seconds, Patrick Bamford becomes English football's voice of reason
Springboks legend Tendai Mtawawira tells us what he really thinks of Ellis Genge
'Beast' Mtawawira is a big fan of Mike Ross' Lions front row
Jose Mourinho is about to step up and become the hero football needs
"We did find him hours later and we made up." - How Flynn and his best friend came to blows in Croke Park
You may also like
22 hours ago
Football's greatest heist has been happening in broad daylight for years
23 hours ago
Ander Herrera rips European Super League apart, just like we all knew he would
3 days ago
Jose Mourinho responds to Paul Pogba criticism after Spurs draw
5 days ago
Man United make Old Trafford change in bid to improve home form
1 week ago
Mourinho launches astonishing attack on Solskjaer in response to "conning" remark
1 week ago
Harry Kane expected to push fo Tottenham exit if they miss out on Champions League
Next Page