Not my words, but the words of football fans everywhere, who have made it their duty to mock Jordan Pickford for the perceived crime of having tiny little T-Rex arms.

He actually has normal-sized arms for an adult male - they're probably longer than average if anything - but it has now stuck, and his behaviour on Saturday against Newcastle United won't have done him any favours.

That is because Pickford, jumping for a very easy high ball, ended up dropping said ball over his head and into the path of the oncoming Newcastle United striker Salomon Rondon.

Rondon probably couldn't believe his luck, with this figurative gift from God handed to him by his small-armed deity. All he had to do was collect the ball and knock it into the net.

Should Jordan Pickford still be on the pitch? 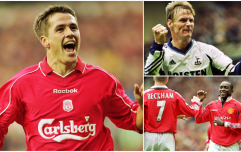 END_OF_DOCUMENT_TOKEN_TO_BE_REPLACED

He couldn't though, because he had Jordan Pickford wrapped around him like a koala in the middle of a fucking typhoon. It's difficult to stress just how brutally and oafishly Pickford took down Rondon here.

The term 'rugby tackle' is tossed about very casually these days - like it means nothing! - but this was genuinely more akin to what you'd expect on the pitch at Twickenham rather than St. James' Park.

Fortunately for Pickford though, it all worked out (at the time). He was somehow not sent off by referee Lee Mason and he actually ended up saving the resulting penalty.

Newcastle got the last laugh however, as they clawed their way back from 2-0 down to win the game 3-2. All's well that ends well, then.