John O'Shea speaks out about Netflix doc Sunderland 'Til I Die

The former Sunderland captain only featured briefly in the documentary, but there were plenty of images of him looking forlorn.

Sunderland 'Til I Die was supposed to be a documentary that charted the Black Cats' rise from the trauma of Premier League relegation to get back in the big time for the 2018/19 season.

Unfortunately, for the club and its supporters, the team followed up one relegation with another. They were left in League One and the documentary makers were left with a cracking insight into a big and well-supported club's implosion.

Former Sunderland captain John O'Shea featured in the doc but he was not heard from much, or focused on, until he came to wish staff goodbye at the end of the season.

Now with Reading, O'Shea, who retired from Ireland duty last year, spoke about that Netflix documentary on a BBC Five Live appearance on Friday.

"I have not watched all of it," he said. "I've lived through it so why would I need to watch it again?"

"It's one of those things. You go in in the morning, go in for a little bit of treatment and you realise there's little mini cameras dotted around." 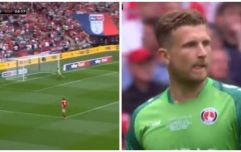 END_OF_DOCUMENT_TOKEN_TO_BE_REPLACED

The likes of Darron Gibson and Aiden McGeady both spoke on camera, but O'Shea says he was glad that the eight-part doc featured many of those, behind the scenes, that keep the club ticking over.

"The few bits I've seen," he said, "I'm glad the people of the club in the canteen, the player liaison officer, the kit men, they are really good people and I'm glad they have come out of it looking well.

"The club itself is an amazing, amazing club and I loved every minute of it as it's a great place to play football. Yes the fans are passionate and vociferous but who doesn't want that?

"I'm glad it's getting good reviews. The people behind it were good people. You got to know the camera people but how things can be portrayed, with clever editing, for some of it I'd say it definitely came out unfair on some people.

"That's just how it was at the time as it was a negative story. It wasn't going to come out positive on everybody."

Sunderland are currently third in League One, four points off leaders Portsmouth but with a game in hand.

You may also like
1 year ago
John O'Shea announces he is set to retire at end of season
1 year ago
After Roy Keane's attempt to sign him at Pizza Express, Mido knew it would never work
1 year ago
Trailer for Netflix’s Sunderland documentary gets to the heart of a club in turmoil
1 year ago
Aidan McGeady tears into some of Chris Coleman's Sunderland decisions
1 year ago
Eric Cantona explains motivation for his most iconic Manchester United goal celebration
1 year ago
Liam Lawrence claims row with Roy Keane led to his transfer the following day
Next Page