O'Shea leaves Sunderland after seven seasons with Sunderland FC whom he joined from Manchester United in 2011.

The 38-year-old follows international teammate David Meyler to the club and Royals manager Paul Clement is expecting O'Shea to make a significant contribution to the club next season. 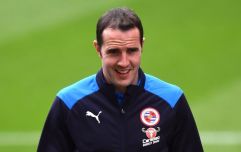 END_OF_DOCUMENT_TOKEN_TO_BE_REPLACED

“John has played and won at the very highest level – he has won five Premier League titles, been part of a European Cup-winning side and earned 118 caps for his country! He will bring us fantastic levels of experience and proven leadership qualities.

“We looked very carefully at John’s recent playing statistics and he played a total of 40 games for Sunderland last season; he is still incredibly fit and a hugely motivated individual. So we look forward to him being a big contributor out on the pitch next season.”