He borrowed Paul Merson's glasses to get his point across.

You would think that Jeff Stelling has seen just about everything there is to see in his years of covering football, but after VAR denied Brighton a penalty against Norwich, it was just too much for the presenter.

Neal Maupay was clipped by Tim Krul in the box, and the VAR replay confirmed as much, but referee Graham Scott, still decided against giving them the spot kick.

Stelling reacted by taking the glasses off his colleague, Paul Merton, and waving them at the camera, in a sensational rant about the referee and VAR.

"Graham Scott... I mean seriously, seriously? You can see he has clipped Maupay!

"You have the VAR! You have seen it about 10 times. How can you not see, that he has clipped him?

"How can you not see that he has clipped him!?" 👓#BHAFC think they should have a penalty against Norwich - Jeff clearly thinks they have a point! 😂 pic.twitter.com/SEq2hTZXro 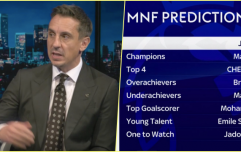 END_OF_DOCUMENT_TOKEN_TO_BE_REPLACED

The presenter keeps repeating the word "seriously" as the decision has clearly made him lost for words, but he definitely gets his point across.

The question he raises about VAR, and what it's actual point is, if not to spot these mistakes, is particularly accurate. The inclusion of the video replays was to prevent mistakes like these from happening.

Maybe a new pair of glasses, as suggested by Stelling, is just what the match officials need.


popular
Kieran McGeeney on the defensive after post-match questions on brawl
Damien Comer targeted in brutal, chaotic Armagh and Galway brawl
Conor Gleeson's gesture to heartbroken Ethan Rafferty a tonic after sideline brawl
Shane McGuigan does a 'Sueey' Cristiano Ronaldo would be proud of after winning MOTM
Roy Keane makes good on bet after seeing Cork fall to Dublin
"That bit of a fracas nearly woke us back up again" - McDaid never doubted his boys in the shoot-out
QUIZ: Name every club to play in the Champions League
You may also like
1 month ago
No need for Sky Sports to apologise as Shane Lowry stays in PGA mix
3 months ago
Micah Richards unexpectedly thrust into co-commentary debut by audio issue
3 months ago
MOTD2 presenter Mark Chapman to replace Jeff Stelling on Soccer Saturday
3 months ago
Chris Kamara reportedly set to depart Sky Sports after 23 years
4 months ago
“It didn't fall into place last week. It wasn't meant to be" - Roy Keane on his failed talks with Sunderland
4 days ago
The behind-the-scenes story of how Bayern signed Sadio Mané from Liverpool revealed
Next Page