Jason McAteer is fortunate that he has a huge chunk of credit in the Republic of Ireland footballing bank, as he has come after national treasure Brian Kerr with a stark, brutal admission.

END_OF_DOCUMENT_TOKEN_TO_BE_REPLACED

The pre-match discussion - ahead of Manchester City and FC Copenhagen, in the Champions League - was about manager's gaining the respect of players, and how hard it can often prove for those that have not featured at a high level.

McAteer, who played 52 times for Ireland, including two World Cup jaunts, got deep on his time with the team when League of Ireland stalwart Brian Kerr took over from Mick McCarthy. The comments were unforgiving, but it gives an insight into how tough Kerr would have found it with many of his players. McAteer said:

"I'll be brutally honest here... we were talking [before] about Brian Kerr... I played under Jack Charlton, who had won the World Cup with England and who instantly had the respect of the whole dressing room. We looked up to him.

"Jack's tactics weren't great but they worked for us, we looked up to him and we played that way, and we got success [qualifying for three major tournaments]. Then Mick McCarthy came in. He had [captained] Ireland at the World Cup and was a big figure in the country. He then became our manager, and we looked up to him and did what he wanted to do. We ended up running through brick walls for him, got success and ended up getting to the [2002] World Cup.

"Then Brian Kerr took over, and I got to admit, and I'll say it now, I'm looking at this fella, thinking, 'What have you actually done?'

"I'm looking at this fella thinking, what have you done in the game?!"@MCATEER4 with a brutally honest assessment of former Republic of Ireland manager Brian Kerr. pic.twitter.com/GtuiSqpH8A

END_OF_DOCUMENT_TOKEN_TO_BE_REPLACED

Brian Kerr, a well-respected footballing figure in Irish circles and a popular pundit on Virgin Media, among other broadcasters, won two League of Ireland titles with St Patrick's Athletic in the 1990s.

He then led Ireland to underage success at U16 and U18 levels, before delivering a third-place finish at the 1997 World Youth Championships.

END_OF_DOCUMENT_TOKEN_TO_BE_REPLACED

Kerr was appointed Ireland senior men's manager in November 2002 but failed to lead his country to a European Championship or World Cup before he departed the role in late 2005.

Jason McAteer played at the 1994 and 2002 World Cups for Ireland. His greatest personal contributions came in scoring qualifier goals against The Netherlands, home and away, including the winner at Lansdowne Road in 2001.

There has already been a reaction to his comments on Kerr, with a Wikipedia user updating the former Liverpool and Blackburn star's page: 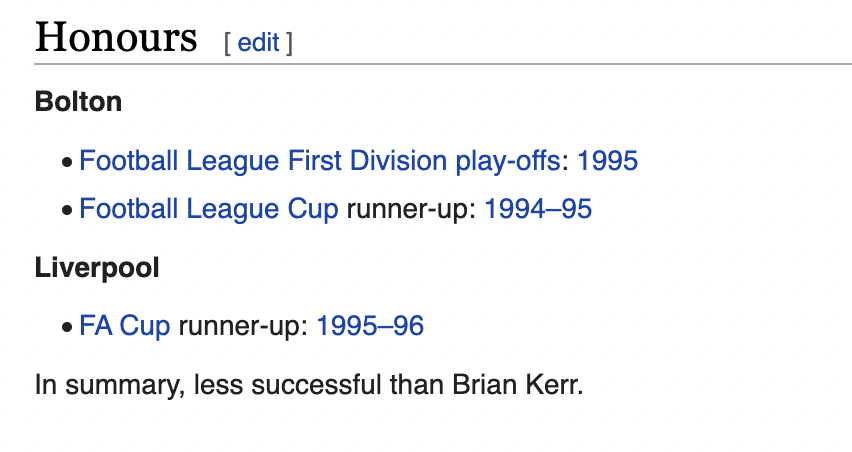 Why do people think this is a personal attack on Brian ? Its not - its a mindset of a dressing room at top elite level. Players will look at credentials and ask questions. This dressing room had just come off the back of Jack Mick and 3 WC Id say expectations were higher - sorry