Things have not all been plain sailing for James Rodriguez since his move to Real Madrid from Monaco in 2014.

He arrived after winning the Golden Boot at the 2014 World Cup, where he lit up the tournament with a series of star performances and excellent goals. 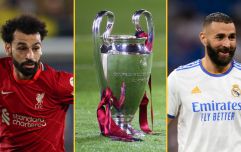 END_OF_DOCUMENT_TOKEN_TO_BE_REPLACED

But after his successful inaugural season in white, he struggled for minutes on the pitch, with the necessity for a natural holding midfielder becoming more apparent and he lost his place in the side to Casemiro.

He was not even on the bench for the Champions League final last season. It was clear he needed a change. With Mario Götze failing to impress at Bayern for various reasons and an ageing squad needing an injection of youthful energy, Bayern Munich was the obvious place for James to resettle.

And he is loving life in Bavaria. Speaking to Sport1 in Germany, he said:

"Bayern is like Real Madrid, a club of the highest caliber.

"It's a bit cold, but I've settled in well, it's a new life for me and Munich is a fantastic city. I'm really happy here.

"I am very satisfied with my first half year."

END_OF_DOCUMENT_TOKEN_TO_BE_REPLACED

James is at Bayern on a two year loan, but it sounds like he has no plans to return to Madrid any time soon. Madrid probably won't miss him either, with the likes of Marco Asensio and Isco to call upon for creativity, not to forget Toni Kroos and Luka Modrić in central midfield.


popular
Pitch-side microphone picks up Eric Dier joke about Mo Salah
'ROG isn't that sort of guy' - Brian O'Driscoll on first Ronan O'Gara encounters
Cutting through the contradictions from one of the worst television segments of the year
Aiden McGeady details the abuse he suffered after playing for Ireland instead of Scotland
Roy Keane shows great comic timing after Jack Grealish party invite
"I've still got about 10 different screws left in me" - Jack Clifford's challenge
Noel Gallagher left 'covered in blood' after headbutt from Ruben Dias’ dad
You may also like
3 days ago
La Liga response to Kylian Mbappe's PSG deal is extreme, but the argument can't be overlooked
3 days ago
Spanish TV say Mbappe will 'never be a man' after snubbing Madrid for money
3 days ago
Kylian Mbappe told Perez he was staying at PSG in leaked WhatsApp message
4 days ago
'Paris is my house!' - Kylian Mbappe signs biggest contract in world football
4 days ago
La Liga chief brands PSG 'an insult to football' after Kylian Mbappe contract news
4 days ago
Kylian Mbappe asked PSG to sell Neymar and replace him with Ousmane Dembele
Next Page