The veteran midfielder had a point.

James Milner had a stand-up row with Liverpool teammate Virgil Van Dijk after his side went behind to an early Manchester United goal.

United, after losing their opening two games of the Premier League season, were the sharper of the sides at Old Trafford, and deservedly took the lead after 15 minutes.

END_OF_DOCUMENT_TOKEN_TO_BE_REPLACED

A nice passing interchange between new United signings Tyrrell Malacia and Christian Eriksen teed up Jadon Sancho in the centre of the Liverpool box. Alisson committed himself to an early dive, and Milner slid in to block a shot that never came.

In between both men was Van Dijk, who stood with his arms behind his back. Sancho cut back inside and slotted past the Dutch defender to make it 1-0. 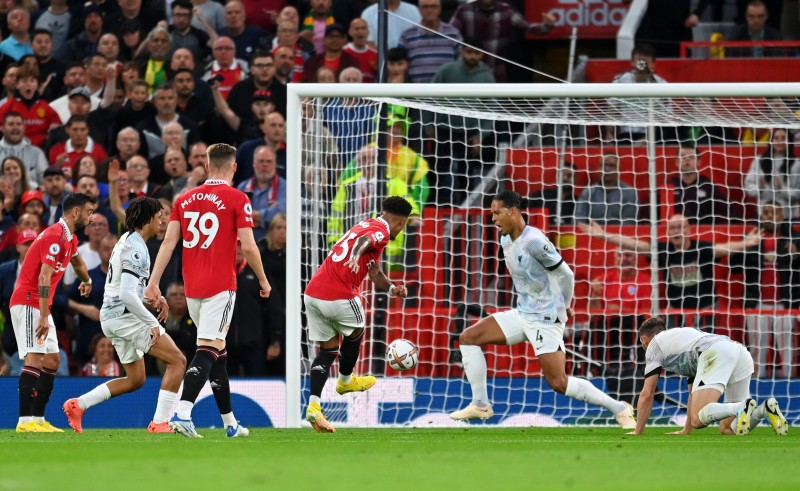 As Jadon Sancho ran off to celebrate, before being mobbed by his Manchester United teammates, James Milner turned on Virgil Van Dijk. He was clearly livid.

Milner clearly felt his teammate needed to be less passive and press up on Sancho after his slide across the United attacker forced him to cut back inside.

"Van Dijk has been sloppy this season," said Roy Keane, on Sky Sports. "You've got to get out, there."

Calm as you like from Jadon Sancho and Manchester United lead at Old Trafford! 💥 pic.twitter.com/7ZkB2jf1FO

Milner, having a go at Van Dijk for Sancho doing him dirty and not covering up. 😂q pic.twitter.com/dZR02JB6MY

Over on the sideline, Liverpool boss Jurgen Klopp shook his head. This was the seventh successive league game that Liverpool have conceded first in.

Ahead of the game, Van Dijk was asked about his team conceding openers to their opponents and argued that, "These kind of stats come out, then everyone is paying attention.

"Obviously, you don't want to concede at all, and that is what we are trying to avoid today. So, that's the focus - winning games and, in order to do that, not conceding goals."


popular
Kilmacud Crokes to counter Glen's objection over extra players in All-Ireland final
"He's a serious specimen, 6 ft 3 as well, so he's an incredible athlete" - Geaney hails O'Connor's impact
"It's very clear how I felt about it. I had a very definite view on it" - McEntee on Dunboyne's 2005 semi-final saga
January transfer window 2023: Follow the latest updates live in our hub
The two toughest calls in Ireland team to face Wales are in the backline
"He didn't give me that jersey back!" - Johnny Sexton on new rival Jack Crowley
Laura Woods savages Twitter user after he asks her to come over while his wife is at work
You may also like
2 days ago
Cristiano Ronaldo told Jorge Mendes they were 'done' if he failed to find big transfer
2 days ago
Quiz: Name the Argentina players to have scored for Man United in the Premier League
3 days ago
Roy Keane gives his verdict on Mikel Arteta's touchline behaviour
3 days ago
Arsenal fans arrested in Uganda for celebrating Man United win
3 days ago
Roy Keane's threat to Cesc Fabregas about 'pizza incident' has panel in stitches
3 days ago
Erik ten Hag criticises Man United players after late defeat
Next Page