James McClean forced to release another statement on his poppy stance

"They have nothing in their whole imperial arsenal that can break the spirit of one Irishman who doesn’t want to be broken."

James McClean has released another statement about his decision not to wear a Remembrance Day poppy on his jersey.

Since arriving in English football in 2011, the Derry winger has not worn the poppy at any of his clubs.

Most people support his stance and right to free speech. Many others cannot believe it is still a talking point after all these years. 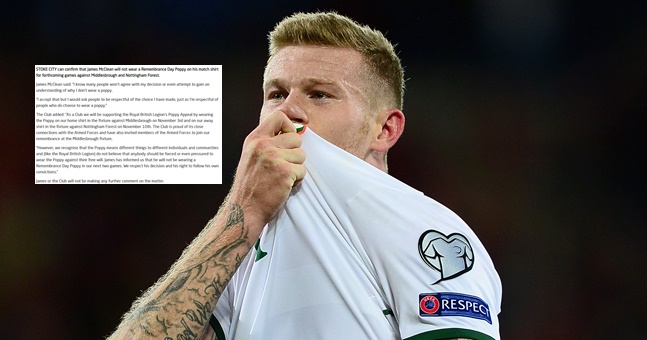 Stoke City have issued a statement, so has James McClean and they want that to be the end of it. ...

There are still a few who take issue with it, and some were present at the bet365 Stadium on Saturday. McClean was a second-half substitute in Stoke City's goalless draw with Middlesbrough.

The 29-year-old came on for the final eight minutes of the match and appears to have been booed by some in attendance. McClean hit back at his detractors in an Instagram post later in the day.

"Your abuse, your throwing things, your booing, do your worst. To the home fans that are actually educated and support me, thank you. To the section of uneducated cavemen in the left hand corner of the Boothen End Stand that want to song their Anti-Irish songs each game and call me a Fenian this and that, I am a PROUD FENIAN. No c**t will ever change that, so sing away." 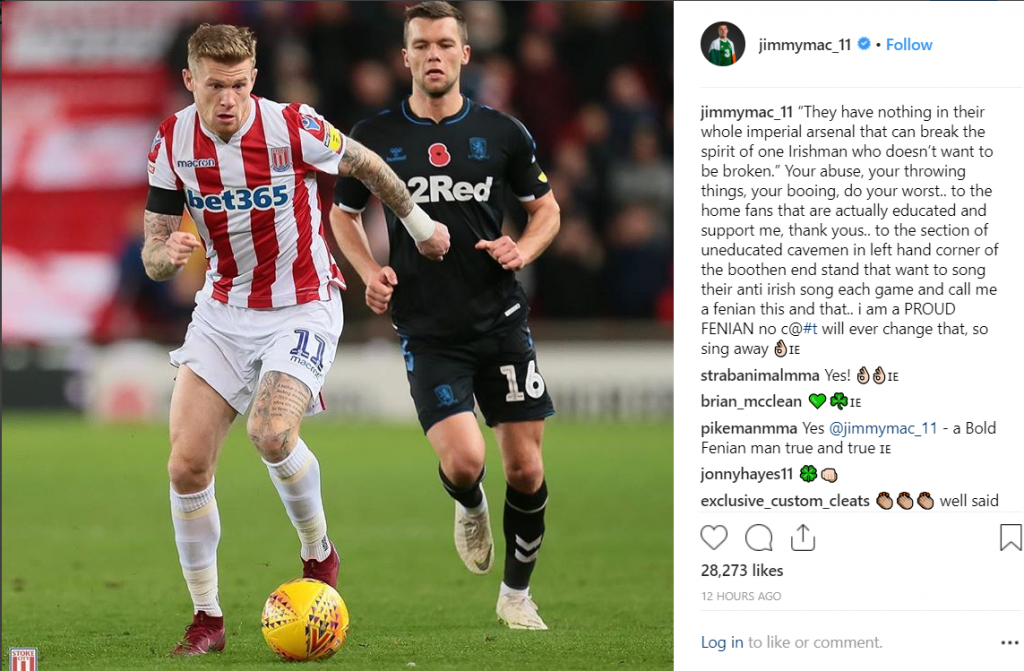 END_OF_DOCUMENT_TOKEN_TO_BE_REPLACED

Stoke released a statement last week stating their support for McClean's poppy stance. Most Stoke fans in attendance and on social media also appeared to support his right to exercise free speech.

But, of course, there will always be a minority who aren't as tolerant.

Some of that minority heckled and booed McClean as he left the field on Saturday evening.


popular
ROG hits the nail on the head assessing Ireland's performance
The Ireland XV that should definitely start against Italy
Player ratings on a dismal day for Ireland in Twickenham
"Emotions will be charged" - Sean O'Brien backing Ireland for Triple Crown
QUIZ: How well can you remember this season's Premier League results so far?
"Next thing, all I see is this 'BANG' coming in over me... It was O'Driscoll"
Triple Crown wrenched away as England scrape Ireland off their boots
You may also like
8 months ago
'I'm a white Irishman... That's not high on the agenda in England'
9 months ago
Jonathan Walters calls for better support for James McClean
9 months ago
Kick It Out defend James McClean after birthday abuse
9 months ago
James McClean receives disgusting, hate-filled, anti-Irish birthday card
11 months ago
James McClean wins damages after slur made on radio by Ulster Unionist Party councillor
11 months ago
James McClean tweets message to the English FA after latest abuse incident
Next Page