Republic of Ireland midfielder James McCarthy played his first match of football since January on Tuesday in a 4-0 win over Gor Mahia in the SportPesa Trophy.

The injury sidelined the 27-year-old for 291 days but he made his return just after the hour mark against Gor Mahia coming on for striker Cenk Tosun.

Everton were leading 2-0 at the time thanks to goals from Ademola Lookman and Kieran Dowell before Nathan Broadhead and Oumar Niasse tagged on another two goals to complete the rout.

END_OF_DOCUMENT_TOKEN_TO_BE_REPLACED

McCarthy played the full 90 minutes of the Everton U23's 1-0 win against Manchester City last month in what was his first official game back since the leg break and he revealed that he leaned on teammate and Ireland captain Seamus Coleman during his rehabilitation from injury.

"Obviously Seamie had been there and done it," McCarthy said last week. 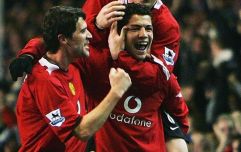 END_OF_DOCUMENT_TOKEN_TO_BE_REPLACED

"When I got into the tunnel [after the injury] I looked up and he was there which was great. We're best mates in football.

"He was telling me not to worry, saying I'll get through it and come back stronger. The next day he came back up when I was in hospital which was really good of him.

"I've asked him if he felt wee niggles and he's been brilliant telling me not to worry. It's good to bounce off him if anything is niggling or anything."


popular
World Cup 2022 Day 13: All the major action and talking points
Shay Given on how far Ireland could've gone at the 2002 World Cup with Roy Keane in the team
Skills, scowls and scores - Luis Suarez rolls back the years against Ghana
From Ireland to Argentina: Alexis Mac Allister's Irish roots explained
Ronaldo finally reveals why he got that hideous haircut
The World Cup 2022 team of the tournament so far
The confirmed World Cup pundits for RTE, ITV and BBC have been released
You may also like
1 month ago
Seamus Coleman pays tribute to Donegal explosion victims
1 month ago
Everton and Man United player ratings: Cristiano Ronaldo's 700th club goal settles it
2 months ago
"It was a red card" - Frank Lampard on controversial Virgil van Dijk tackle
2 months ago
Jordan Pickford sets the record straight on Mo Salah shot in stoppage time
3 months ago
Everton fan clashes with steward after dropping child to grab Anthony Gordon's shirt
3 months ago
Just like when they were players, Steven Gerrard edges it past Frank Lampard
Next Page