The midfielder has been instrumental for Villa this season.

Aston Villa are one game away from a promotion back to the Premier League and Jack Grealish's creativity, tireless runs from deep and a unique ability to draw fouls out of nothing have all been invaluable as the club finished fourth in the league and now face Fulham in next Saturday's play-off final.

His scintillating form, particular since the turn of the year, is all the more remarkable considering the awful circumstances the 22-year-old has had to overcome, having suffered a freak injury before the season had even began in a friendly against Watford.

Grealish was hurt in a seemingly innocuous challenge with his former teammate Tom Cleverley, and in an interview with the Mirror, has opened up about the incident that could have kept him out of the game permanently.

“I took a kick to the kidney and it split in two places. It was pouring with blood,internally, for about five hours," he said.

“It’s the worst pain I’ve ever been in. I went to Heartlands hospital in Birmingham. They found out what it was and I was rushed to the Queen Elizabeth for an operation. Before it happened, the surgeon had to tell me the consequences of what could happen if it didn’t work.

“He looked me in the eye and said, ‘Jack, you could die’. My reply was, ‘What?’ I was genuinely scared. I was expecting to be back inside a week, but it was three or four months.

“I knew Tom Cleverley from our time together at Villa and he couldn’t believe it. I spoke to him the morning after the operation and I said, ‘Mate, do you know where I am and what’s happened?’ He couldn’t have been more apologetic.

“I’m a big believer that everything happens for a reason. I came back from that injury a different person.

“I thought about how everything could be taken away from you in such a short space of time. I worked so hard to come back because I missed football. I wanted to be the best I could be. I was in the gym every day and my energy is so much better. I feel stronger, fitter."

Grealish has shown a newfound physicality in his play since returning to the side in a new central midfield role, capable of carrying the ball the length of the pitch on his own and shrugging off players like Tommy Shelby shrugs off short glasses of whisky. 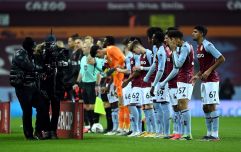 END_OF_DOCUMENT_TOKEN_TO_BE_REPLACED

He has grown considerably as a player and he attributes the newfound maturity and improved decision making in his game to both the coaching staff and influence of senior members of the squad, such as club captain John Terry.

No longer does he flirt in and out of games, often dictating the tempo for this Villa side with mazy hip-shake swerves through midfield or his expansive, progressive passing from deep.

In a team full of veterans and experience, he has quietly become the player they first look for whenever they receive the ball.

“This time last year the manager would have brought me off. In the last three months, 95 per cent of the time I’ve played 90 minutes.” 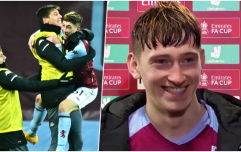 END_OF_DOCUMENT_TOKEN_TO_BE_REPLACED

“The manager believes in me, the coaching staff believe in me and the likes of JT have helped me on and off the pitch. It’s given me the confidence to go and play.”

Grealish was mobbed by fans for his performance after Villa's 1-0 victory over two legs against Middlesborough in the semi-final and now hopes to repay the faith shown in him by his manager, who has also had a difficult time of late after losing both his parents within the space of a few months.

“When I was in hospital, [Bruce] came to see me twice and he Facetimed me every other day to see how I was. You remember stuff like that and if I do end up scoring the winner, I’ll dedicate it to him" he said.

Should the lifelong Villa fan - who has been at the club since he was six - score the winner, he'd never have to buy a drink in Birmingham again.

Although now he'd probably ask for a water.

Watch out for Prince William and John Carew celebrating together in the stands 👑 https://t.co/JdZJq4Af2C


popular
Ireland make respectful gesture during Parade of Nations at Olympic opening ceremony
The JOE Friday Pub Quiz: Week 253
Cormac Egan's interview after Offaly u20s beat Dublin is everything that is pure about the GAA
After seven years in charge, Armagh have a big decision to make on Kieran McGeeney
Absolutely no doubt who was the top pundit of Euro 2020
"Any team I've been involved in over the last five years, they've been way above their station" - GPS stats gone too far
Pre-match rituals - What it's like in the Croke Park changing rooms before a game
You may also like
7 months ago
Jack Grealish throws dummy with his car to escape media at court
7 months ago
Jack Grealish: 'Embarrassing' VAR is 'ruining the game'
9 months ago
"What a footballer" - Klopp lauds Jack Grealish after Liverpool thumping
1 year ago
Conor Hourihane sticks it to fan after making Premier League debut
2 years ago
47-word release ends Glenn Whelan's Aston Villa career
2 years ago
Jack Grealish cut his head open during trophy lift
Next Page