"It was a surprise when I got called up, I wasn’t expecting it at all after the game and it’s been a mad couple of days."

Jack Byrne has been reflecting on his time with the Republic of Ireland team. The Shamrock Rovers midfielder was a surprise inclusion in Mick McCarthy's squad for the Euro 2020 qualifiers against Gibraltar and Georgia.

However, injuries to Alan Browne and Callum O'Dowda, and Byrne's impressive form for the Dublin club, changed McCarthy's plans.

The Ireland boss was at Tallaght Stadium last Friday evening to see Byrne score a stunning goal against Sligo Rovers. McCarthy, impressed with the performance of the Manchester City academy graduate, called him up to the Ireland squad.

On Wednesday morning at FAI HQ in Abbottstown, the Dubliner tried to make sense of the past few days and life in the squad, revealing that he wasn't aware McCarthy was watching him play at Tallaght Stadium last week.

The 22-year-old also thanked the staff at his club who signed him from Kilmarnock ahead of the League of Ireland season.

"It’s been a mad couple of days and I’m still trying to get my head around it. The lads have been great to me," Byrne told reporters.

"I’m delighted to be here. I just wanted to do well and get back on track. Without Rovers, Stephen Bradley, Stephen McPhail and the coaching staff there, I don’t think it would have been possible to be here. 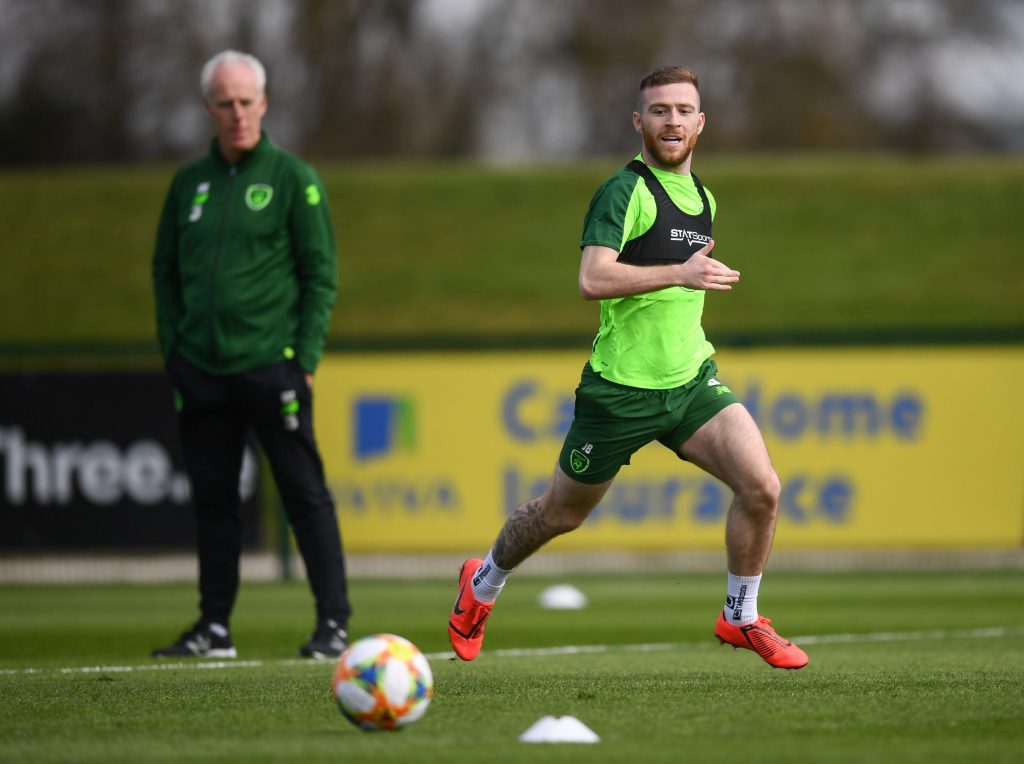 The midfielder, who shook the hand of every reporter before the press conference started, also spoke about adjusting to playing in Irish domestic football.

"I feel as if I’m getting better with the games," he said.

"I needed the games, I needed a couple of games to get going. The last two games, I’ve been getting to my level. Before that, I was quite tired. But I'm looking forward to the next couple of games now."

Byrne said that the main difference between training at his club and at international level is that the tempo with Ireland a "lot higher." 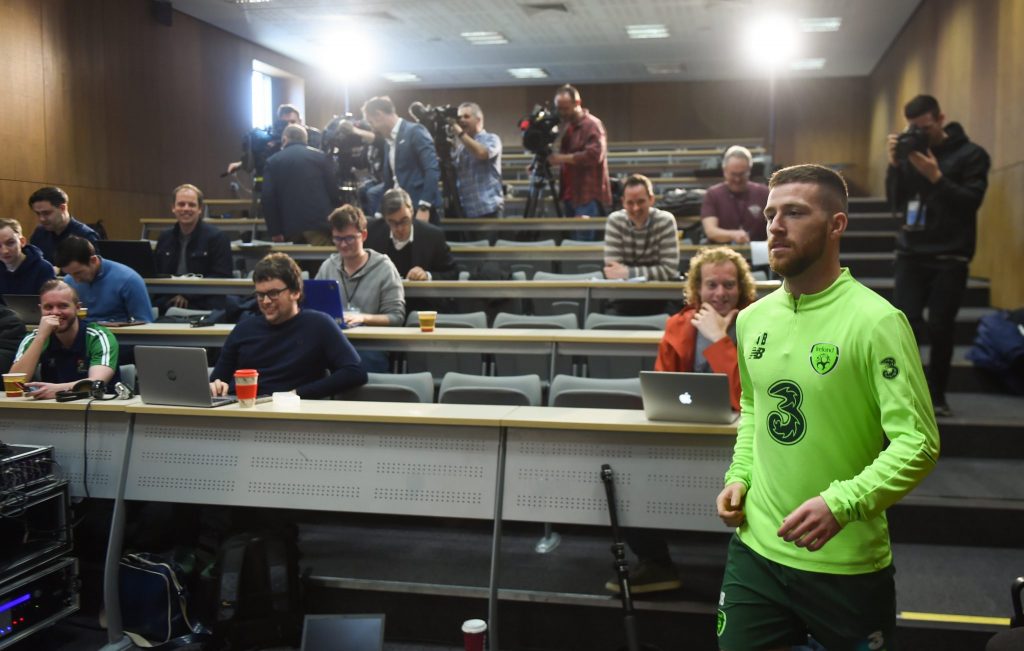 He was also aware that his inclusion in the squad is a positive development for the entire League of Ireland, as it shows that there is a pathway to the senior side.

"It’s good for the younger players in the league," Byrne said about his call-up.

"I’m still only 22 as well, but I think it’s good for the likes of Trevor Clare and Brandon Kavanagh at our club as well after getting called up to the 21’s.

"If themselves and other young players can see that maybe there is an international pathway there it will be good.

"A lot of the international teams at the different age groups are made up of League of Ireland players. So, I think it can only be good for the league." 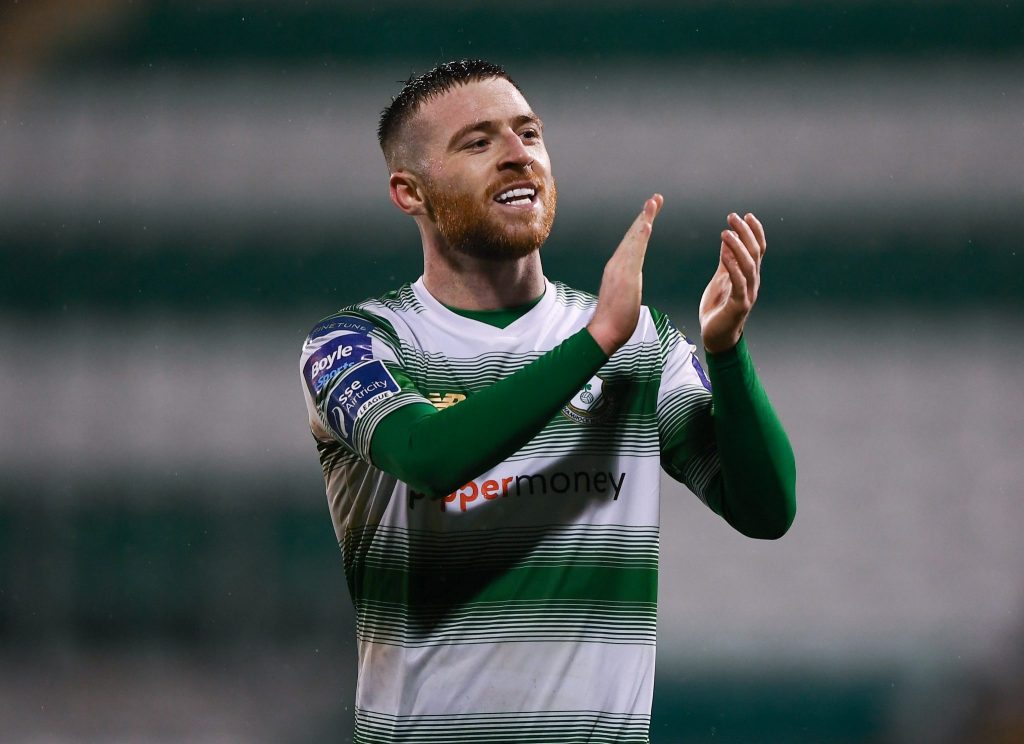 Byrne's journey to the Ireland senior squad hasn't been straightforward. The Dubliner joined Manchester City from St Kevin's Boys in 2012 and was a regular in their underage sides. He was highly-rated by Patrick Vieira, the former Arsenal captain who was a coach at the club at the time, and impressed on loan with Cambuur in the Eredivisie.

The midfielder was also invited to train with the Ireland senior team in March 2016. However, Byrne's career immediately after leaving City didn't go to plan.

After an unproductive loan spell with Blackburn Rovers, he joined Wigan Athletic in January 2017. A year later, he signed for Oldham Athletic. Eight months after that, he joined Kilmarnock after a difficult spell with Oldham.

After finding first-team opportunities hard to come by in Scotland, Byrne returned home and signed for Rovers, a move that has resulted in his call-up to the Ireland squad. 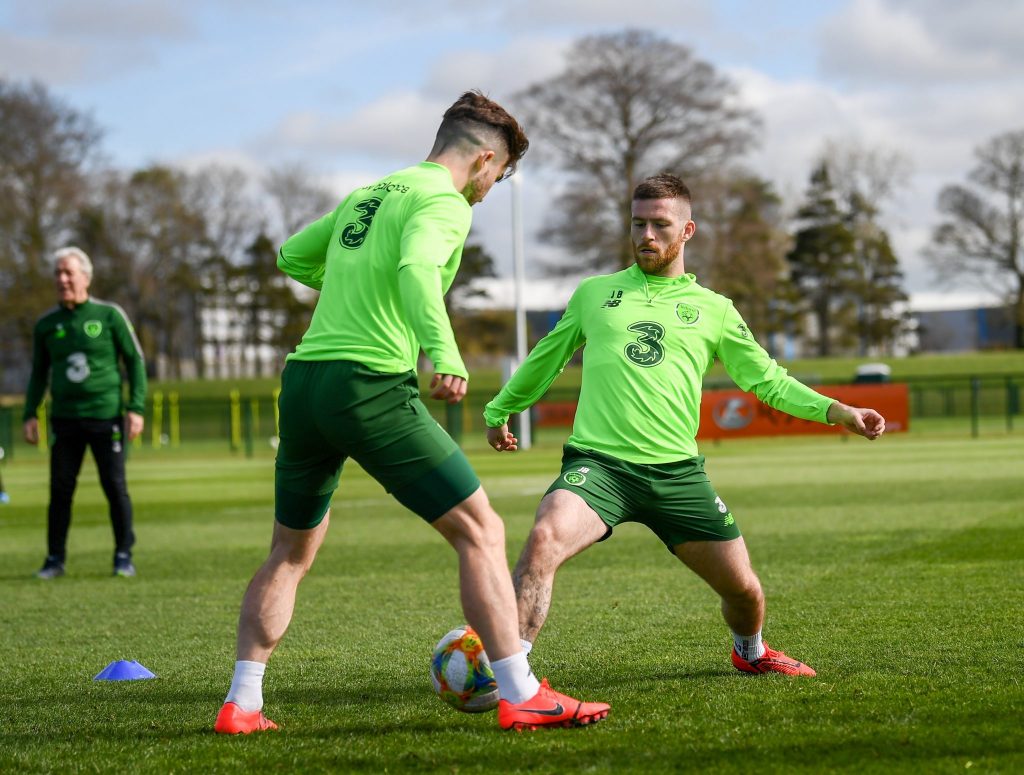 "I left Man City and signed a deal with Wigan and two or three weeks later the manager that signed me was gone," he said.

"You can't dwell on these things. It was a big decision for me to leave Man City at the time, I could have easily stayed there and went back to the under-23s or went back out on loan.

"But I wanted to try and prove that I was ready for men’s football and the gamble didn’t pay off at the time, unfortunately.

"Sometimes you have to take one step back to take two steps forward and reset. I’m grateful that I am back playing well again."

Byrne was also asked if he has an eye on returning to English football.

"To be honest, I’m not even thinking about that, all I’m thinking of is training in half an hour. You can’t think like that and I want to do well for Rovers," he replied.

"I’ll be taking it day by day and whatever happens, happens."

That attitude has enabled Byrne to respond to career setbacks and earn a place in the Ireland squad.


popular
Jake Paul set upon by Floyd Mayweather and security staff after confrontation
The Garry Ringrose narrative around the Lions Tour is complete bull
"Sadly at this point in time, it's Johnny" - Why Sexton missed Lions spot
South African media shocked by Lions omissions of Sexton and Ryan
'Jesus Christ! How am I going to put up with this lad for nine weeks?!'
The biggest Lions head-scratchers as Warren Gatland surprises us all
You'd swear the world was ending as Spanish tv host goes after Eden Hazard
You may also like
1 month ago
Brighter days ahead for impressive young Bazunu
1 month ago
Brian Kerr had seen this coming from miles away, we just weren't ready to hear it
1 month ago
"It's a shocking result... That's on us. We should be embarrassed" - Seamus Coleman
1 month ago
Full Ireland ratings after pitiful home defeat to Luxembourg
1 month ago
Gavin Bazunu starts in goal as Ireland team to face Luxembourg named
1 month ago
The Ireland team Stephen Kenny should start against Luxembourg
Next Page